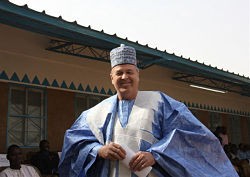 One of the nastiest side-effects of a difficult childbirth is the fistula, when an infant gets jammed so tightly in the birth canal that it cuts off the flow of blood to surrounding organs. Eventually the flesh rots away, leaving a hole, from which things -- piss, shit, menstrual blood -- leak.

You don't hear much about fistulas here in the U.S. because, if there's adequate medical care, they're pretty easy to fix. But in parts of the world where there isn't, like Africa, they're distressingly common. There's also a tendency to blame the victims: Women who have them smell bad and are unable to have any more children and they become pariahs, banished to the outskirts of their villages.

For the past 35 years, Dr. Lewis Wall has been studying the problem of fistulas in West Africa, first as an anthropologist then as a obstetrician and gynecologist. Now, after several years of fundraising, he's finally opened a hospital in Niger devoted to repairing fistulas.

The Danja Fistula Center opened in February with 42 beds, large enough to support 1000 fistula repair surgeries per year. The center also plans to train local doctors in fistula repair, help women who have fistulas develop skills to be able to support themselves and, perhaps most importantly, run community education programs to teach women how to prevent fistulas in the first place. (The best prevention: Stop forcing women who are too young -- say, 12 -- and whose bodies are too small to have babies. If that fails, a Caesarian is a better option than vaginal childbirth.)

Wall began planning the Danja Fistula Center in 1995 after he saw a similar hospital in Ethiopia. Niger is a poor country -- most people earn less than $1 a day -- and had no comparable facilities at the time.

"I thought I was fairly realistic because I had lived in West Africa for two years," Wall said in a statement. "But we had to contend with unexpected obstacles -- bureaucratic hassles, insects, a lack of communication and supplies, and people who thought their own interests would be threatened." 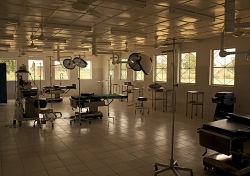 Wall's foundation, the Worldwide Fistula Fund, raised the $1 million necessary to build the center. Donors included the Trio Foundation, the singer Dave Matthews, an executive at Merrill Lynch and a group of old ladies in New York who sent in $35 they collected during a potluck dinner.

The project also received a boost from Nicholas Kristof, the New York Times columnist and international do-gooder, who wrote about Wall in 2009:

The new fistula hospital in Niger is a tribute to the heroic doggedness of Dr. Wall, and with luck it will be replicated in many other countries. Anybody who has seen a fistula patient after surgery -- a teenager's shy, radiant smile at something so simple as being able to control her wastes -- can't conceive of a better investment.

Wall traveled to Niger for the opening of the hospital in February. "It was wonderful to be there that day," he said. "This hospital may seem small by American standards, but it will make a large difference in the lives of so many African women who have suffered needlessly for too long."