Saturday Night Live poked some fun at East St. Louis with a political skit this past weekend that had Keenan Thompson (Good Burger, FTW), in character as ESL mayor Alvin Parks, proclaim his city to be a "hell hole." The real life Parks was reportedly not amused by the characterization.

And then today, Senator Dick Durbin -- himself an ESL native -- paid a visit to discuss the late-night crime in his hometown with more than 100 community leaders and law enforcement personnel. This is the headline on the Belleville News-Democrat story about that summit. 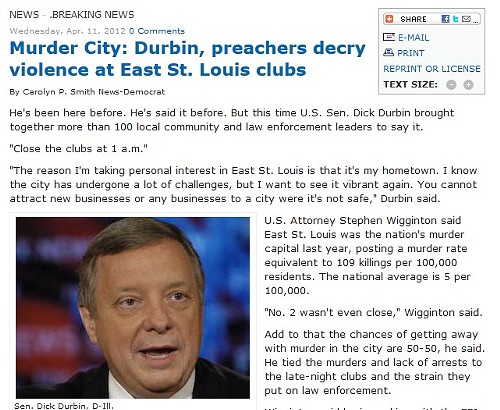 Please note that Durbin did not call East St. Louis "Murder City," nor did Illinois State Attorney Stephen Wigginton. Wigginton does point out that ESL has a murder rate of equivalent to 109 killings per 100,000 residents, which dwarfs the national rate of 5 murders per 100,000 people. That's a lot of homicide by any standard.