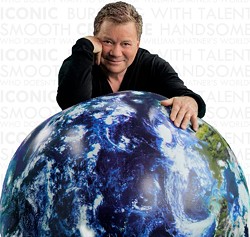 We're giving away two tickets to William Shatner's one-man show, "It's Shatner's World -- We Just Live in It," this Thursday, April 12, at the Peabody Opera House. You could win those tickets, if you're able to answer a relatively simple question about the man.

But first, the rules.
-- You must include a phone number or working email address with your answer so that we can contact you and arrange pick-up of the tickets.
-- You must be able to pick up your tickets at the RFT offices before 4 p.m. on Thursday, April 12.
-- You must not be an employee of the Riverfront Times, the Peabody Opera House or the evil mirror universe version of Mr. Shatner.

All right, formalities out of the way. Here's your question:
Early in his career, William Shatner starred in the film adaptation of a famous and most excellent work of classic literature. Name that film -- or the book, which shares the same title in English. Good luck.

You Need Not Be Present to Win!