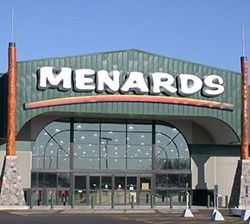 Response from the city appears at the end of this article.

At long last Richmond Heights believes it has a plan for the long suffering Hadley Township, the mostly African-American neighborhood east of Hanley Road and south of Dale Avenue that city officials have allowed to rot for a decade under the threat of eminent domain.

After four previous proposals to redevelop the neighborhood all failed, the city council last night approved a proposal to demolish Hadley Township to make way for the home-improvement store Menards and a to-be-determined "big box" retailer.

Why? Because apparently that little pocket of St. Louis County doesn't have enough mega-hardware stores and "big box" retailers with a Home Depot just across the street and a Lowe's, Walmart and Sam's Club next door.

But set aside that conundrum for a moment to consider something even more galling: the amount of taxpayer support the new stores want to locate in Richmond Heights.

The Wisconsin-based Menards estimates it will cost around $56.1 million to build a shiny new building and is asking Richmond Heights to approve a tax-increment finance package to pay for roughly half of the construction costs -- $24.1 million. Brentwood-based Pace Properties, developer of the TBD big box store, is a bit more modest in its request for a taxpayer handout. It wants $27 million in TIF financing for its $125-million proposal -- for about 20 percent of the total cost.

Who do these developers think they are -- an NFL team!? (Apologies to Stan Kroenke -- oh, wait, never mind.) And what happened to the original plan for Hadley Township -- to make it a mixed-use development with retail and housing?

Also, wasn't the entire point of redeveloping the neighborhood about increasing the tax revenue for the city? How does giving away $50 million in taxes bolster Richmond Heights' coffers? Or was this really just a thinly disguised plan to get rid of the town's lone minority neighborhood?

Daily RFT has a call out to Richmond Heights' city administrator Amy Hamilton for an explanation. We'll update this post once we hear back.

1. Richmond Heights sees the development as worth the cost -- in the long-run -- as it will provide additional tax monies for the city and the Maplewood-Richmond Heights School District. However, that money won't be seen until after the city repays the bonds sold to fund the TIF. When that happens is anyone's guess.
2. The Menard's TIF request is so large because it includes interest costs. The Pace Properties request does not include interest costs -- meaning that the true cost of the TIF would likely be even higher than the $27 million they're requesting.
3. While Home Depot and Lowe's are both located within a few hundred yards of the Menards location, neither of those big-box hardware stores are in Richmond Heights. Home Depot is in Brentwood. Lowe's is in Maplewood.
4. The city abandoned its plans for a mixed-use development for Hadley Township last summer after determining that there was not enough interest in a residential component for the site. Moreover, Johnson says that when the city's TIF commission met to discuss dropping the residential component, only one resident stood up to oppose the change. She adds that only 46 residences in Hadley Township are currently occupied, and the majority of those (26) are rental units.