There may be no vaccine for the plague of cruise ships -- for further details, see David Foster Wallace's classic essay, "Shipping Out" -- but not at least team of researchers that includes Tom Smith, a lead investigator at the Donald Danforth Plant Science Center, may be on the way to building a vaccine that will keep you from puking your guts out while aboard ship. We must clarify: puking from the stomach flu, not from seasickness or enforced cheerfulness.

Stomach flu, Smith notes, has more serious consequences than ruining the vacations of rich Americans. "In the third world," he says, "it's a major cause of death in infants because of the complications. The vomiting and diarrhea lead to severe dehydration."

The key to the potential vaccine lies in the structure of the stomach flu virus.

The stomach flu virus is more properly called a norovirus in scientific circles, and it's part of a larger family of viruses called calciviruses. Smith's research team, assembled by the National Institute of Health (NIH), was assigned to study the structure of calciviruses in mice.

What Smith's team found astonished them. Most viruses are tightly packed balls, with all the protein and DNA stuffed inside. The calciviruses were something else entirely.

"It literally looked like balloons on a string," says Smith. "The proteins were hovering above the surface. We were like, 'Really? This can't be right.'"

Fortunately, another research team, led by Grant Hansman, a former Danforth postdoc now at the National Institute of Infectious Diseases in Tokyo, also was looking at the structure of calciviruses and found the exact same bizarre structure. 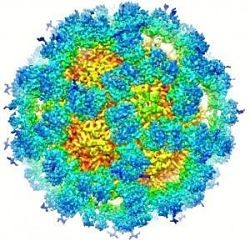 Hansman took the research a step further and discovered that antibodies, the cells produced by the immune system to fight bacteria and viruses, attach to the body of the calcivirus, right at the bottom of the balloon strings. This is also bizarre, says Smith, because antibodies usually attack viruses at their outermost layer. But it's useful information for the scientists because the base of all the calciviruses are pretty much the same. If you can successfully attack one virus, you'll be able to attack the rest of the family.

This isn't the way virus families usually operate. "I also work on human rhinoviruses," says Smith. "Antibodies see each rhinovirus as distinct. There are hundreds of different species, and each one can make you sick."

Smith, Hansman and their collaborators have published their research on noroviruses and antibodies in the Journal of Virology. Next, the scientists plan to continue their study of how antibodies attack noroviruses to determine the best way to build a vaccine, which Smith is already sure will be "pretty weird."

Smith, however, has no plans to experiment firsthand with the vaccine if it comes out. He doesn't go on cruises. "My wife gets seasick," he confides. "She throws up for other reasons."