Saturday Night Special: Big Crowds, A Brawl and A Couple Shootings in the Loop 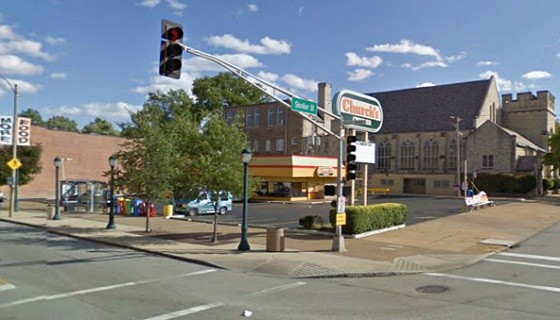 The unseasonably warm weather brought out a big crowd to the University City Loop on Saturday night. Most of those people were there for a concert, a meal, or just to sit outside and enjoy drink on a nice night, but there were also some looking for trouble. And as is the case with trouble, it doesn't take much work to find it.
Hundreds of teenagers congregated in the East Loop near Skinker Avenue and Delmar Boulevard shortly before 9 p.m., according to KMOX's Michael Calhoun, who was on the scene. A fight broke out, then shots were fired into the air. Heavier than normal police patrols from University City and St. Louis City were already in the area, and they quickly moved to defuse the situation.
But you can't keep stupid people from acting stupidly when they really set their minds to it.
At 11 p.m., two teenagers were hit by gunfire in the parking lot of Church's Chicken at that same corner of Delmar and Skinker. Both are in stable condition at area hospitals.
Mayor Francis Slay, University City Mayor Shelley Welsch and unofficial Loop Mayor Joe Edwards held a press conference Sunday that was short on details about what happens next for the Loop but long on reiterating that what happened Saturday night is out of the ordinary.
As a pedestrian who works and lives within the compass of the Loop, I'll co-sign on that. Last spring and summer were quiet on the brawling and shooting front, at least compared to the previous years. The Loop's controversial 9 p.m. curfew for unaccompanied teens younger than 16 and the impending debut of security cameras, plus more police foot patrols in the neighborhood, have gone a long way toward mitigating problems before they start. Indeed, when the RFT spoke with Edwards about the security cameras back in February, he proudly noted that crime was at a 40-year low in the area.
But St. Louis City has a midnight curfew for minors, which is why both the brawls and the shooting happen along Skinker. Figuring out that part of the problem is going to be the trick. Police reportedly had a nuisance abatement truck parked catty-corner from the Church's at the Shell Station, and it didn't preclude the swelling gaggle of teenagers, the brawling or the shootings.
To reiterate, you can't stop stupid -- you can only hope to contain it.