Blues Suffer a Setback in Anaheim 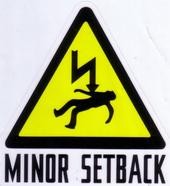 The Blues needed to win that game last night. They really did.
Not because they're hurting in the standings, of course; they are still the NHL's points leaders, though the lead over the New York Rangers has shrunk to just a single point following last night's loss. Even so, the President's Trophy, while very nice, isn't the end-all, be-all in the National Hockey League. So even if the Blues do come up a little short of winning that particular trophy, there's a much better one that will be awarded at the end of the playoffs, one that really matters.
No, the reason they needed to win the game last night is because the road doesn't get any easier from this point on, and really only gets tougher. The Blues haven't played well against the Ducks in Anaheim at all this season, but that's still a mediocre team the Blues should be able to handle without much trouble. That they didn't is at least moderately worrisome.
The reason the Blues lost last night -- and the reason they've looked much more vulnerable the past handful of games than they did for two months prior -- is simple: they're getting beaten in their own zone. When the puck is down in the opponent's zone, the Blues play fast, hard, and they play with ill intent. Move the puck into their zone, though, and the Blues go softer than a Republican senator discussing bank regulations. In the defensive zone, the Blues seem content to just flip the puck down the ice and hover in the skating lanes the last few games.
The difference is purpose. The Blues play with a sense of purpose when they're taking it to the opposition; they haven't played with anything resembling purpose in front of their own net the last week or so. It's very frustrating.
Jaroslav Halak didn't exactly do himself proud, giving up 4 goals on just 22 shots on goal, but the goals he allowed should never have happened in the first place. Ken Hitchcock's defense doesn't usually give up scoring chances like those; I wouldn't call it complacency, exactly, but it's clear the effort hasn't been the same lately in front of the goal as it was for most of the season getting here.
The biggest highlight of the night had to be the second career goal for Jaden Schwartz, playing in just his second NHL game. I know I was skeptical of bringing him straight to St. Louis from college earlier this month, and I still worry about his smallish stature leading to a lack of durability long-term, but watching him move on the ice is still very exciting. He looks a lot like Andy McDonald out there, sans fifteen years of the NHL grind on his legs.
Like I said before, the Blues aren't really in trouble, by any means. They've played so brilliantly over the past two months that they can afford to miss a point or two here and there. Even so, there's still plenty of time for things to go wrong, and then there's the question of how the team is playing heading into the postseason. If Hitchcock and the Blues want to make the deep playoff run they look to be capable of -- and maybe bring home that President's Trophy as well -- they need to find what part of their magic formula has suddenly curdles the last few games. And then do something about it.