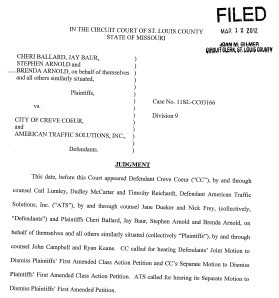 Attorneys Ryan Keane and John Campbell with the Simon Law Firm filed the suit last year on behalf of four people who'd received tickets from the cameras. The lawsuit alleged that the way Creve Coeur handled the tickets was unconstitutional in trampling due process and violating laws prohibiting self-incrimination. The suit also claimed that Creve Coeur and camera-vendor American Traffic Solutions (ATS) unjustly enriched themselves by collecting money for the tickets and further alleged that the defendants committed civil conspiracy.

Not so, ruled Judge David Vincent. In his 23-page ruling, Vincent dismissed all claims against Creve Coeur, noting that the city offers appropriate due process through its municipal court. Vincent dismissed the cases with prejudice, meaning that none of the plaintiffs can sue the city again on similar claims.

Last October the Missouri Court of Appeals upheld a lower court's ruling that also found that Creve Coeur's camera system does not violate state law or due process. That ruling and this week's ruling involving Creve Coeur stand in sharp contrast to a recent court decision that found St. Louis City's red-light ordinance violated state law and could not be enforced.

As we reported in a February article about the St. Louis ruling:


But Judge Neill noted in his ruling last week that the case in St. Louis was different from the one in Creve Coeur. While both cities claim their red-light cameras citations are "civil" in nature, the Creve Coeur ordinance specifically states that violators cannot face jail time if they ignore their citation. St. Louis' ordinance has no such clause.

Moreover, the St. Louis citations do not offer car owners a clear way to defend themselves. Noted Judge Neill: "[T]here is no summons or court date provided with the notice of violation and the notice does not convey to the recipient the right to contest the notice of violation except where 'the vehicle was being operated by a person other than the owner or the vehicle or the license plate captured by the automated traffic control system was stolen.' The court finds that the city's red light ordinance violates procedural due process and plaintiffs are entitled to summary judgment."