The Greatest Baseball Novels of All Time: A Modest Compendium 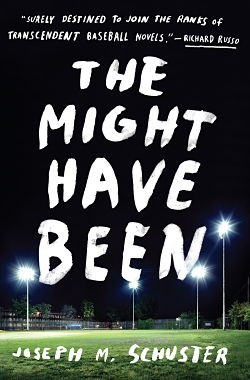 The Natural by Bernard Malamud The story of Roy Hobbs and his bat Wonderboy has become an American classic. But if all you know of that story is the movie version, starring Robert Redford and his golden halo, the book may come as a bit of a surprise. Says Schuster: "I'm a sucker for The Natural as a movie, but as art, the novel is much better, with the down ending."

Shoeless Joe by W.P. Kinsella Another classic overshadowed by the movie adaptation, in this case, Field of Dreams. "I like Shoeless Joe," says Schuster, "but I hate Field of Dreams. Field of Dreams is too obvious. There are layers in Shoeless Joe that aren't in the movie. They eliminated one of my favorite characters, Eddie Scissons. He kept telling people he was the oldest living Chicago Cub. The main character looks him up in the Baseball Encyclopedia and finds out it's a lie. He's a wonderful character. It's about dreams. I like the fact that the principal character didn't reveal the lie."

The Southpaw and Bang the Drum Slowly by Mark Harris The first two books in a series about the exploits of Henry "Author" Wiggen, a pitcher for the fictional New York Mammoths. "The series goes downhill after those two," says Schuster, but both, especially Bang the Drum Slowly, about the death of one of Wiggen's teammates from cancer, show that there's more to a baseball book than, well, baseball.

The Art of Fielding by Chad Harbach Last fall's blockbuster about the fortunes of the Division 3 Westish College Harpooners. "I wanted to hate it," says Schuster. "I wanted it to be horrible. Unfortunately, it's not. I can still remember vividly a handful of the most significant characters in the book. I read it the week it came out, so the fact that the characters are still vivid four months later tells me Harbach did a great job creating characters."

The Celebrant by Eric Rolfe Greenberg The list of great Jewish ballplayers is scant: Hank Greenberg and Sandy Koufax, obviously, Moe Berg and Shawn Green if you stretch. And also Rod Carew. Those who can't play become fans. ("Oh, to be a center fielder, a center fielder--and nothing more!" moaned Nice Jewish Boy Alexander Portnoy. Note how many books on this list are written by Jews.) This cult novel, set in New York City in the early twentieth century concerns the entanglement of the lives of the great WASP-y Giants superstar Christy Mathewson and a family of Jewish immigrants.

The Great American Novel by Philip Roth Speaking of Portnoy, here's a baseball novel by his creator, Philip Roth. A book called The Great American Novel would have to be about baseball. This one is an alternative history concerning the Patriot League, a third major league whose entire existence was expunged from the public record after some of its players became embroiled in a Communist plot during World War II.

Wheat That Springeth Green by J.F. Powers Joe Hackett once aspired to be a saint. Now he's an ordinary parish priest who seeks consolation from the boredom of his life in beer and baseball games. Unjustly neglected, Powers is one of the great Catholic novelists, and a great novelist, period.

The Universal Baseball Association, Inc., J. Henry Waugh, Prop. by Robert Coover If you enjoy fantasy baseball, take a moment during your draft to give thanks to Robert Coover who pretty much invented the pastime in this novel. It also, incidentally, addresses the great existential questions of God and creation. (J. Henry Waugh, Jahweh, geddit?)

If I Never Get Back by Darryl Brock Another cult novel that somehow combines the elements of time travel, the 1869 Cincinnati Red Stockings (baseball's first professional team), Mark Twain and Irish revolutionaries into a tremendously fun read.

Sometimes You See It Coming by Kevin Baker Several players on the New York Mets attempt to unravel the mysterious origins of their star player, John Barr, after Barr falls into a slump. Baseball history nerds can amuse themselves by trying to figure out the real-life inspirations for the fictional characters.

If you're short on time:

You Know Me Al by Ring Lardner Arguably the first classic work of baseball fiction, written during the dead ball era, You Know Me Al is a collection of short stories in the form of letters written by Jack Keefe, a hopelessly thick-headed and egotistical pitcher for the Chicago White Sox, to his buddy back home in Indiana.

Summerland by Michael Chabon In this fantasy novel, a trio of kids save the world by playing baseball. Could happen. It's also a pretty good way to introduce the young'uns to baseball history and other American mythologies.

The Comeback Season by Jennifer E. Smith Smith happens to be Schuster's editor...and a Cubs fan. Do not let this deter you, St. Louisans. This story about a girl dealing with her grief over the death of her father by devoting herself to the Cubs is lovely and moving, and it may help you understand Cubs fans a little better -- nay, perhaps even develop some compassion. Also, it's the only book on this list with a female main character.

Ball Four by Jim Bouton It doesn't seem so radical now, but Bouton's frank and funny nonfiction account of the 1969 season, which he spent with the Seattle Pilots (in their one and only year of existence) and the Houston Astros, caused an uproar in the baseball establishment, which still wanted us to believe baseball players were cardboard Heroes. Ha! Clearly those people don't read.