March Madness: Help Decide Which Cardinals Team Was the Greatest Ever 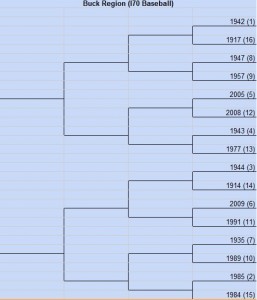 March and October are the two best months of year if you're a sports fan: The new seasons are getting underway, while the old ones are just reaching their peak (World Series! NCAA Tournament!). There's so much sports going on, you don't ever have to leave your living room, unless of course, you plan to watch your games at the bar.

The NCAA Tournament regularly inspires people to start running "tournaments" of all sorts of non-sporty things: local comedians, blatant objectification of women -- sorry, "hotness." But our friends at Pitchers Hit Eighth, C70 at the Bat, I-70 Baseball and Aaron Miles' Fastball have an original take on the bracket concept that will ease us gently into baseball season:

How about The Greatest Cardinal Team of All Time?

The four sites have each drafted sixteen teams -- that's a full 64-branch bracket -- with each hosting a different "region." Starting tonight, readers will get to vote on which team in the matchup they feel is superior. When the tournament reaches the Final Four, it will move over to United Cardinal Bloggers.