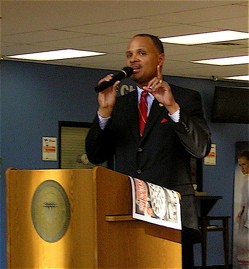 East St. Louis native and Illinois Senator Dick Durbin last month urged Mayor Alvin Parks to end the city's late-night liquor sales in the hopes that it would cut down on violent crime. As he had done in the past, Parks rejected the notion.

But after two separate shootings long after midnight this weekend apparently convinced the mayor that the time was right to institute a 1 a.m. cut-off point for all non-casino liquor sales.
Two St. Louis men, ages 21 and 27, were shot around 4 a.m. Saturday after leaving Club Flava (200 block of Collinsville Avenue) and were treated for non-life threatening wounds at an area hospital.
Just about 4 a.m. Sunday, Steven H. Holmes, 23, was shot and killed while walking to his car after being denied entry at Club 103 (100 block of Collinsville).
In addition to banning all post-1 a.m. liquor sales until further notice, the city suspended Club 103's liquor license and pulled Club Flava's business license. Both clubs will have disciplinary hearings this week to determine if they can regain those licenses.