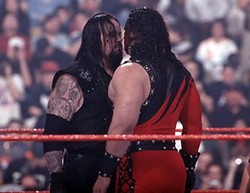 Linus R. Davis, 43, the St. Louis County man who was charged with diverting seized packages containing marijuana for distribution and sale, has pleaded guilty to one felony count of conspiracy to possess with intent to distribute marijuana and one felony count  possession with intent to distribute marijuana. His alleged partner-in-crime, his brother St. Louis Police Sgt. Larry Davis, entered a plea of not guilty.

The indictment against the brothers alleges that  Sgt. Davis, acting in his official capacity as a member of the Central Patrol Division-Special Operations Group, would visit package shipping facilities and seize packages suspected of containing marijuana. He would take these seized parcels to his home rather than the Police Laboratory, and then with the aid of his brother, remove and repackage for sale whatever marijuana they found.

So one brother admits that yes, that's what we did, while the other brother claims that "no, I never did that," you gotta suspect that their relationship has devolved to "strained" status.

Linus Davis will be sentenced on June 7; he faces a maximum of five years in prison for each of the two charges. Larry Davis currently awaits trial.