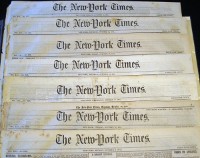 Arthur's on the rocks, at least in Missouri.

New York Times reporter Arthur G. Sulzberger (more recognizable by his byline A.G. Sulzberger), the heir to the Times' media throne -- he's the son of the current publisher -- has set sail from his post at the Gray Lady's new Kansas City bureau to take a gig with its metro desk in New York.

Gawker broke the story, posting an internal memo that went out to Times staffers yesterday.

Famous for being a vegetarian, we're surprised he lasted so long in a state where meat-eating is pretty much an institution. But hey, whatever works.

During his stint in Missouri, the scion of the Times actually touted some pretty good man-of-the-people reporting skills. He penned fun Ozark yarns, like the one chronicling the downfall of the Carter County sheriff who got busted for belonging to a meth ring, as well as other only-in-the-Midwest tales, like this one, where he discovered an old pharmacy in Ava, Missouri, that still sells ice cream cones for a nickel. More recently, he wrote the most in-depth account of the pursuit and capture of Fast Eddie of the Ozarks, the fugitive who'd been wanted for nearly twenty years by British authorities after he robbed $1.5 million worth of loot from an armored car and fled the country for America.

Earlier this year Sulzberger declined to be profiled by Daily RFT, mentioning that keeping a low profile helped him on the reporting trail. The only major profile of him that we can find comes from the Boston Phoenix back in 2006, when the prince of the presses was a 25-year-old reporter for the Providence Journal, fresh out of Brown University. Sulzberger declined to be interviewed for that piece, too.