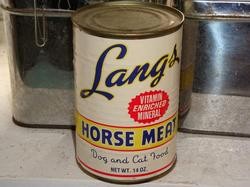 Unified Equine announced plans for a horse-meat processing plant just outside Mountain Grove, Missouri in mid-February. The plant would create jobs for the economically depressed corner of the Ozarks, and perhaps start a new cuisine trend in America; the horse would be processed for human consumption.

Shit got even more heated in Mountain Grove.

A board of alderman meeting was swamped by 300 citizens, forcing the meeting to move to a nearby senior center in order to accommodate the crowd. And according to Mountain Grove private attorney Cynthia MacPherson, the majority of the attendees are against the plant opening in their town.

That flies in the face of Unified Equine COO Sue Wallis' statement that "the folks in Missouri are 100 percent behind what we're trying to do and how we're trying to do it." It turns out folks in Mountain Grove object to the plant on the grounds of potential ground water, light and noise pollution issues, the negative effect the plant will have on property values and even concerns about animal abuses at the plant.

Roger Lindsey, a local banker with ties to the industrial park where the plant would be located if approved, spoke in support of the plant on the basis of the much-needed jobs the operation would provide for the region. He only lasted five minutes before the crowd booed and heckled him out of the building. The mayor had to gavel the crowd three times, and threatened to clear the room if he wasn't allowed to speak his piece.

A Facebook page for the opposition, The Community Preservation Project, has gone into full-court press mode, acting as a clearinghouse for new information on Unified Equine's plans for the region, and Mountain Grove citizens have started a petition against the plant at Change.org. (Warning: That link contains graphic images and descriptions of how horses are transported to slaughter plants.)

Unified Equine announced its plans with quite a fanfare, but it seems like the citizens of Mountain Grove are determined to make sure those plans end with a whimper.