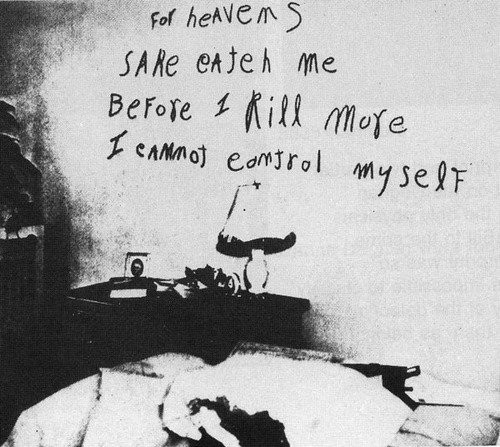 William Heirens, the man dubbed the Lipstick Killer by Chicago newspapers back in 1946, died Monday in the Dixon Correctional Institute. He was 83, and had been imprisoned for 65 years.

Heirens twice confessed to killing two women and a young girl; the girl's body was dismembered and the pieces thrown into the sewer system. It took months to find all of her limbs, and during the search for her body the Chicago papers kept steady pressure on the police to find the killer, and also held the public's rapt interest with scores of reports concerning possible suspects, alleged motives and new evidence. Of course, it's easy to build the hype when you have a killer who uses a lipstick to scrawl the desperate message, "For heavens sake catch me before I kill more, I can not control myself" on the wall at one of the murder scenes.

Heirens was a 17-year-old burglar at the time of the killings. Despite his confessions, Heirens later maintained that he had been brutally tortured by the Chicago police over six days as they tried to coerce him into admitting he'd done it, and that he only done so to avoid the electric chair. His confession involved an alternate persona, George Murman, who had supposedly been the real killer, although that may have been all the sodium pentathol administered by a pair of psychiatrists during the interrogation.

During his decades in prison Heirens learned several trades, helped set up prison educational programs and aided other prisoners in their own appeals process. Because of the parole policies in place during the 40s, Heirens was eligible for a complete release from prison in 1983. Illinois' Attorney General Neil Hartigan famously blocked that release with the hard-bitten statement, "I'm going to make sure that kill-crazed animal stays where he is."

Heirens' case was the perfect storm of media sensationalism, hard-boiled police work and lurid details. The infamous lipstick message he may or may not have scrawled on that apartment wall survives in popular culture as a frequent piece of album art for bands such as John Zorn's Naked City, and it still retains its power to freeze your blood once you know it's real.