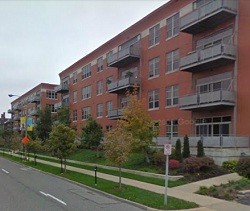 If real estate records are any indication, NFL Hall-of-Famer Marshall Faulk appears to be in a financial tailspin.

Earlier today came news that a Florida condominium he owns is in foreclosure and that he owes the condominium association $21,982 in unpaid dues. And it doesn't end there. In 2010 the IRS placed a lien on his Florida condo, claiming the retired Rams running back owed $105,000 in unpaid federal income taxes.

Now Daily RFT has learned that a luxury condominium owned by Marshall Faulk in suburban St. Louis was sold last August for back taxes.

It's fairly common knowledge in St. Louis that the former Rams great lived in the lofts along Clayton Road in suburban Richmond Heights. St. Louis County real estate records show that a Marshall W. Faulk purchased a 10-room condominium in the building in 2002 for $692,000. (The football player's full name, for the record, is Marshall William Faulk.)

Real estate records also show that Faulk hadn't paid real estate taxes on the 2,500-square-foot condo since 2008. Last August the unit sold at tax auction for $25,600. Faulk owes $27,407 in back taxes on the property, according to the county.

Attempts to reach Faulk through his agent and his foundation were unsuccessful.

Under Missouri law, Faulk can reclaim ownership of the condominium provided he pays his back taxes within a year of the sale. He has until August 22 to do so.

Below is the record from the tax auction with the opening bid for Faulk's property going for $17,389. The buyer, BLH Associates, is a real estate investment firm.

It's unclear when Faulk moved out of his Richmond Heights condominium. His last year with the Rams was in 2005. That same year he registered the condo as the taxing address for a 2004 Bentley and 2005 Maserati. By 2006 it seems Faulk had vacated the property as he registered zero automobiles to the address.