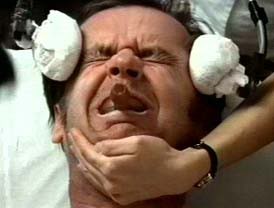 Electroshock therapy is like a relic from bad fifties science fiction (and sounds scary as hell to boot -- though we admit our opinion, just like everyone else's, has been strongly influenced by the therapy scenes in The Bell Jar and One Flew Over the Cuckoo's Nest). Pills make you feel like all your emotions, even the good ones, like horniness, are packed in cotton wool, and they make you fat to boot. A really, really good shrink is hard to find. But depression sucks. So what the hell is a person with a little chemical mood imbalance to do?

A team of doctors at Washington University Medical School has started using another solution: transcranial medical stimulation (TMS). In depressed people, parts of the brain are less active than they should be. TMS uses pulsed magnetic fields to create focused electrical currents to wake those sections of the brain up again.

TMS, explains Dr. Pilar Cristancho, one of the members of the team that developed the procedure, "targets brain circuits involved in regulating mood disturbed by depression, affecting intricate connections between the prefrontal cortex, subcortical and limbic structures by a different mechanism from that of medications."

Unlike antidepressant drugs, which wake up the brain by increasing production of chemicals called neurotransmitters, TMS works directly on the affected areas of the brain, which means there's less chance of unintended side effects, such as weight gain and sexual dysfunction. Unlike electroshock therapy (more properly known as electroconvulsive therapy, or ECT), which also uses electric currents to wake up the brain, it doesn't require anesthesia and doesn't rattle the brain so badly that patients can't think afterward.

TMS is a cumulative treatment, requiring 20 to 30 40-minute treatments over the course of four to six weeks and then regular "boosters" afterward. Because it requires so much extra effort -- and because it's not yet covered by insurance -- it's considered a last-ditch treatment for people who don't respond to medication before pulling out the big ECT-guns.