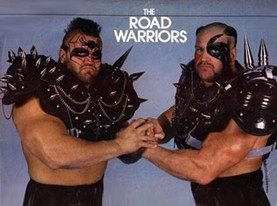 What was that thing? You know, the thing the Blues have so much trouble with. The, the thing? That one thing everyone kept saying was really the biggest thing that might keep the Blues from winning that cup thing?
Oh, that's right. The winning-away-from-home thing. That thing.
Well, the Blues haven't entirely quieted the concerns about their road record, but they have won four games in a row on their current road trip, beating Nashville, Winnipeg, Calgary, and Edmonton in the space of six days and rebounding in resounding fashion from back-to-back home losses just before the current long away swing began.
Last night's 5-2 dismantling of the Edmonton Oilers put the Blues at 87 points for the season, tied with Detroit (actually ahead of Detroit, thanks to tiebreakers, technically), atop the Central Division standings and just one point behind the Vancouver Canucks for first place overall in the Western Conference.
The Blues blitzed the Oilers early, scoring three goals in the first 30 minutes, including their first less than a minute into the contest. With Edmonton's starting goalie, Nikolai Khabibulin (that's former Blackhawk Nikolai Khabibulin; you may commence booing now), out with an injury, the Blues took advantage of backup Devan Dubnyk. The Note's own goaltender, Jaroslav Halak, was good enough to win -- if not quite as brilliant as we've mostly seen from him lately -- and put on a particularly impressive show late in the third period, holding off a strong push by Edmonton in the waning minutes.
Andy McDonald was magnificent, scoring twice and just generally skating circles around everyone else on the floor, and Kevin Shattenkirk collected three point of his own on the night, emphatically stating his mid-season offensive funk is now well and properly over. It was no coincidence the Blues' two best skaters did the majority of the damage; we're only just now beginning to see how impressive the attack can really be with a full complement of speed on the ice.
As many injuries as the Blues have had this season, depth is a definite concern. The top end, though, is looking stronger than ever. The return of McDonald has pushed the top line to new heights, and the second line, highlighted by David Perron's wizardry, has been just as productive. It's when you start to move down lower that the injuries really start to show up and become worrisome.
For now, though, the top lines, along with the Blues' remarkable corps of blue liners, is getting the job done. There was only one lull in the game last night, a five- or six-minute down cycle late in the second period that saw the Oilers climb back within one goal, but the Blues were able to turn the jets back on in the third and put the game away. It was exactly the sort of game we've seen consistently get away from the Blues the last couple of years; an early lead followed by just enough sloppy play and a soft-ish goal or two to let the other team back into it. The 2010 edition of this team spirals and lets the Oilers tie the game up. This year's model, though, toughens up and puts it away.
It still hasn't been the easiest of rides for the Blues on the road this year; last night's win still really only put theme one game over the .500 mark at 14-13-3. But four wins in a row away from Scottrade at one of the most crucial junctures of the season should tell you everything you need to know about just how different this team is from what we've seen in the past.