The Cardinals' Online Museum Goes on the Road 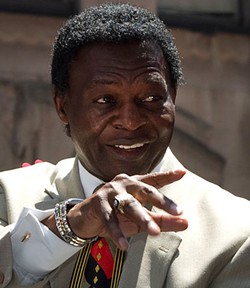 It's a marriage made in...Arkansas? The St. Louis Cardinals' Hall of Fame Museum went into storage back in 2008, in anticipation of it moving to Ballpark Village. As we all know, that didn't quite work out, so in January of 2012, the museum moved to its new home: online at this shiny new website.

As our own Aaron Schafer noted here, while the website is both interactive and frequently updated, you don't actually get to stand in front of any of the more than 16,000 artifacts in the museum and feel the history oozing off of them.

But beginning this Saturday, you can. And all you have to do is go to Little Rock, Arkansas.

From March 3 to September 16, the William J. Clinton Presidential Center hosts Play Ball! The St. Louis Cardinals, an actual exhibition of more than 100 objects from the Cards' HOF collection. A 2011 World Series ring and the World Series trophy will both be on display for a limited time, as will the recently-restored uniform of one Mr. Stan Musial. The whole shebang receives a very grand opening Friday, March 2, courtesy of Arkansas native and Cardinals legend, Lou Brock.

As Bill DeWitt III notes in the Clinton Center's press announcement, "This is a great opportunity to view artifacts from the Cardinals organization." It sure is. It's just too bad you have to travel to Arkansas to do so.