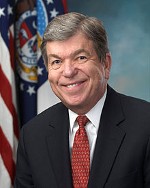 It's nearly March, just six months before the G.O.P. convention, which sounds like a perfect time to celebrate our quadrennial political tradition: culture wars.

In Michigan, Republican presidential nominee Rick Santorum is telling folks there shouldn't necessarily be a complete separation of church and state. In Virginia, lawmakers are trying to require pregnant women to get ultrasounds before abortions. In Washington state, same-sex couples will soon be getting married.

Far be it from Missouri, home of the Bible Belt's buckle, to resist jumping into the fray. Which is why our own Sen. Roy Blunt is championing a bill this week to allow religious institutions to opt out of birth control coverage for their employees. His colleagues in the Senate will vote on the measure very soon.

Democrats are incredulous and say the bill is an overreach that threatens women's health; Republicans say that the government, cheered on by the Obama administration, is trying to trample on basic religious liberties.

Blunt's bill, called the "Respect for Rights of Conscience Act," would allow employers or insurance companies to exclude any provision that goes against their religion. It comes in response to a compromise President Obama made a couple of weeks ago when he accepted the notion that religious organizations shouldn't necessarily have to pay for employees' contraception, so long as they offer a health insurance plan that would do so.

But that compromise doesn't go far enough, say Blunt and several of his Republican colleagues. On Sunday, the St. Louis Post-Dispatch ran an Op-Ed written by Blunt, which characterized Obama's compromise as "outlandish" and "nothing more than an accounting gimmick."

"[T]his decision will impact Americans of all faiths, or of no faith, who believe in the Constitution," wrote Blunt. "This is not about one group, one health care requirement, or one set of beliefs. It's about protecting American's fundamental religious freedom -- a freedom that has been guaranteed for more than 220 years since the ratification of the Bill of Rights."

Some women agree with Blunt that the Obama compromise shouldn't be construed as an attack on health. In a New York Times article this morning, Sen. Kelly Ayotte, Republican of New Hampshire, said: "This is not a women's rights issue. This is a religious liberty issue."

Meanwhile, a Florida political action committee has released a video in support of Blunt's bill. See it here.