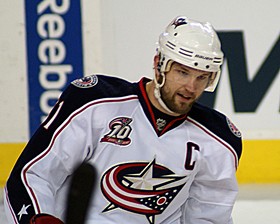 The NHL trade deadline came and went yesterday without the Blues making a big splash. They didn't go out and pry Rick Nash from the cold, dead fingers of Columbus; they didn't add either a goal-scorer or playmaker. Honestly, it was a bit of letdown.
That is not, however, to say I think the Blues made a mistake. There have been a few local sportswriters and personalities quick to criticize the Blues, and the fanbase has been readying their torches and sharpening the pitchforks, blaming ownership questions or incompetent GMing or any number of other things. Even Bernie Miklasz, who I think has written as intelligently as anyone regarding the Blues the past few years, who tweeted his frustration regarding the ownership dilemma and the team's inactivity. It's an easy argument to make, of course; we've seen the Blues' strengths and weaknesses, and this team needs help on offense. So why didn't they go out and get it?
Three words: primum non nocere. First, do no harm.
Doug Armstrong may not have brought in much help at the deadline, but he also avoided making any foolish, reactionary moves that are going to hurt the team long-term in an attempt to push this year's squad a half-step closer to being a 2012 Stanley Cup contender.

The one move the Blues did make was to move former first-round pick Ben Bishop to Ottawa for a second-round pick, but I'll cover that in a separate post. As for immediate improvement to this team, there was none.
And really, I'm okay with that. I would have liked to see an upgrade to the offense, certainly, but at what price? I just don't understand the hue and cry I'm hearing from some quarters about the Blues' failure to make a deal. In case no one has noticed, Rick Nash didn't go anywhere. Neither did any of the other major upgrades that were speculated to be available. Even my own favorite middling upgrade candidate, Martin St. Louis of the Lighting, stayed put in Tampa.
The only really good, even somewhat big deal, in my ever-so-humble opinion, was the Nashville Predators' pickup of Andrei Kostitsyn from the Canadiens. If the Blues could have swung the same trade for Kostitsyn the Preds did, I would be singing Armstrong's praises this morning. Unfortunately, they did not, Nashville did, and any potential playoff matchup between the Blues and Predators just became a fair bit more frightening.
Still, I like that the Blues refused to blow up what they've been steadily building for the past few years to try and gain the extra edge this season. A Rick Nash deal would have not only saddled the Blues with one of the biggest salary cap hits in the NHL -- though Nash might almost be worth it -- but also would have likely cost the team one of their top two defensemen, a top prospect or two -- or else a draft pick, and probably a throw-in or two as well. Are you willing to ship out, say, Kevin Shattenkirk, Vladimir Tarasenko, Vladimir Sobotka, and a first-round pick? I'm not even sure that would have been enough to get the deal done without another player being added, and I think the four-for-one I just proposed would have been a disaster for the team. Or how about changing Shattenkirk to Alex Pietrangelo? I'm sure that would have been enough. Does that still seem like a good idea?
Hell, you want Rick Nash so badly, just wait until after the season and sign Zach Parise. He's basically a better version of Nash, plus he comes without the enormous pain in the ass factor caused by being Rick Nash.
I've written plenty over the past couple months on the subject of the Blues' offense and what they could do to improve it. I wanted to see an upgrade. I really did. But looking around the league at all of the team who needed help and either didn't get any at all or made marginal gains at best, I can't fault the front office in the least for refusing to damage the next five years' worth of playoff runs to add one more piece to an already very good 2012 team. Sometimes the opportunity just isn't there unless you want to do something stupid.
The Blues didn't make the big splash I think a lot of us wanted to see. But they also didn't do anything stupid. And that's just as important.