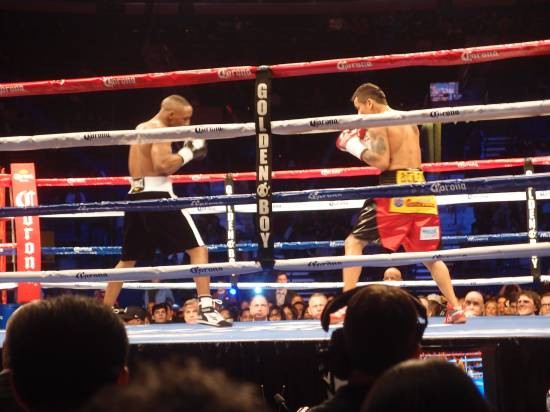 For background on Devon Alexander and the implications of his fight against Marcos Maidana, see last week's feature story "Familair Ring: What must Devon Alexander "The Great" do to live up to his nickname?"

A couple of hours before the big fight, two sportswriters stood at adjacent urinals in the floor level men's room of the Scottrade Center.

"At some point Alexander's gonna get caught," one of them said to the other. "How he reacts will be the story of the night."

The other nodded. They zipped up, headed back to press row, and, a few hours later, they had their story.

Devon Alexander-- the weak puncher, the "quitter", the boxer who wasn't as good as we thought -- eviscerated Marcos Maidana, one of the most feared fighters in the sport. It was an emphatic unanimous decision victory, with two judges awarding him all ten rounds and the other giving him nine.

See slideshow of the fight here.

Alexander (23-1) moved around the ring effectively, popping his jab and consistently throwing  robust combinations as Maidana (31-3) lunged toward him. Maidana caught him every now and then, but the powerful slugger was never able to faze Alexander. Instead, it was Alexander who staggered Maidana several times throughout the fight, with vicious right hooks and pin-point straight lefts.

It was more than a boxing clinic though. It was rugged and dirty and exciting, the way Maidana prefers. Maidana worked to turn the fight into a telephone booth brawl. For the most part, Alexander avoided this with precise footwork, staying on Maidana's outside, sticking-and-moving, setting up head shots with body blows, throwing flurries to counter Maidana's wild swings, then clenching whenever Maidana closed the distance. He executed trainer Kevin Cunningham's gameplan to near perfection. And the fight played out exactly the way Cunningham said it would.

Perhaps most surprising, when the fighters squared-up and traded shots, Alexander tended to get the better of the exchanges. The jump to 147-pounds unleashed a power we haven't seen from him since he knocked out Juan Urnago in March 2010.

"I'm good at boxing guys up," said Alexander. "But you gotta let a guy feel your power, or else he'll just keep coming. So that's why I stood toe-to-toe with him at times."

But Maidana is tough and persistent. As he sensed Alexander controlling the tempo, Maidana sought to knock him off rhythm with guile. To punish Alexander for his dogged clenching, Maidana snuck in punches when the referee was calling for breaks, hit him below the waist, pounded his body when his neck was bent into Maidana's stomach-- anything to turn this into a street fight. So Alexander returned with his own punches on breaks, shots below the waist, knocks to the back of the head, elbows into throat, shoves to the chest to create space. He didn't shy from the fire.

When the bell to end the fifth rang, Alexander bumped through Maidana's shoulder on his way to the corner stool.

"The game plan was to box, but also to beat him up," said Cunningham. "And that's what Devon did, box him and beat him up."

By the later rounds, Alexander was picking his spots. Maidana's legs, tired from body blows and Alexander's constant ducking and weaving, left him pressed against the ropes, taking head shots from both sides. Alexander hurt Maidana in the sixth, sending him to the canvas with a thudding body shot and a left hook square to the face (the referee ruled it a slip). He hurt him again in seventh and eighth. Maidana would get in a solid uppercut and connect on a few of those dangerous swooping rights, but Alexander would answer back with two, three, four punch combination-- jab, left to the body, right hook to the jaw, straight left to the nose. From the fifth to eight round, Maidana landed just twenty punches. Alexander landed 78. In the tenth round, Alexander was still bouncing and sliding around the ring, turning Maidana in circles, throwing precise punches in bunches.

During the post-fight interviews, HBO's Max Kellerman prefaced his question to Maidana by saying, "We've never seen you get dominated like that before..."

It was the best performance of Devon Alexander's career. He lived up to his nickname.