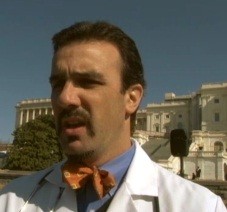 Dr. Aaron Perlut, chairman of AMI, says the money would go to offset the costs of "groomers, trimmers, hair-coloring implements, bacon" that can cost the mustachioed Americans hundreds of dollars a year.

Right now the campaign lives virtually online where proponents can friend The Stache Act on Facebook and show their support by uploading a photo of themselves with a mustache. No lip hair? No problem.

The Facebook page lets you upload a famous presidential 'stache of your choosing onto your mugshot.

AMI plans a Million Mustache March on Washington D.C. April 1 to further the cause. And despite the date, organizers say its no April Fool's joke.

In the meantime, for every person who "likes" Stache Act on Facebook, H&R Block will make a donation to Millions From One, a charity that provides drinking wells in developing countries.