Roy Oswalt Sez: Call Me Back in July 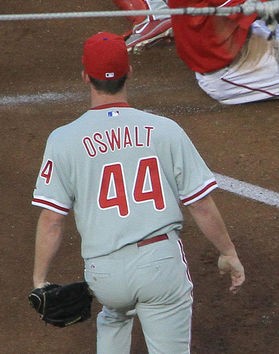 So, after months of dancing and dodging, hemming and hawing, flirting and some other word that starts with an F, Roy Oswalt finally came out and made it official yesterday:
Eh, just call me back in a couple months.
Oswalt announced yesterday he isn't going to sign with any team at the moment, preferring instead to play with his tractors at home while he waits for someone to get desperate enough to up their offer. It was the culmination of an exceedingly odd offseason of courtship for Oswalt, who has turned down offers from teams he doesn't like, purportedly been insulted by offers from teams he does like, and just generally positioned himself as the premier cocktease of the aging power pitcher circuit.
It's also the same sort of move a couple of other high-profile older pitchers have employed in recent years, namely Roger Clemens and Pedro Martinez. Whereas both of them seemed to have concerns about their ability to hold up to a full season's worth of pitching, however, choosing to limit their workload to the back half of the season, Oswalt is literally just taking his ball and going home because he didn't get what he wanted.
I'm sort of torn here, to be quite honest. In one sense, you kind of have to question the guy's commitment to the game of baseball if he's willing to go sit at home rather than continue to work when he appears very capable of doing so. On the other hand, I've always admired those willing to tell pretty much everyone to fuck off if they just don't feel like dealing with it anymore. Oswalt at 34 isn't completely over the hill (unless the medicals on his back say something we don't know, which is entirely possible given how hesitant teams seem to be to go after him whole hog this offseason), putting him in a different situation than either Pedro or Clemens. He's just...willing to walk away.
So yeah, it seems a little petulant to go home and wait around for teams to realize their mistakes just because you didn't get as many millions of dollars thrown at you as you wanted. But, it's also kind of badass. If this were a movie Oswalt would be wearing a three-piece suit with sunglasses, sitting alone on one side of a conference table, with executives from half a dozen major league clubs (who all look like mob bosses), sitting on the other.
Oswalt rocks back a bit in his chair, legs crossed, and says, smirking at the grim-faced general managers, "Gentlemen, you know what I can do. You've seen my work. This is my price. You can pay it, or I can walk out of here and you can go call Ben Sheets to see if they were ever able to put his arm back on." The GMs mutter together for a moment, and then one of them, probably John Mozeliak in pinstripes and a very stylish scarf, clears his throat and leans forward.
"There's no way you can be serious about this price."
Oswalt, still smirking, "Oh, I can assure you, I am very serious. Tractor farm is awful nice this time of year."
Mozeliak considers for a moment, shakes his head, and slides the piece of paper Oswalt had written his price on back across the table.
Oswalt stands up, smiling, and turns to walk away, "Well then, gentlemen, I wish you luck in all your future endeavors. I hear Rich Harden is progressing nicely from his most recent surgery."
Cut to a closeup of Roy's face, shot from the doorway as he walks out. Suddenly a voice from behind calls out, "Wait." Oswalt's smile widens and he nods slightly to himself in satisfaction.
"I thought you might see things my way."
Aaannnd, scene.
I could certainly see a situation in which the Cardinals might have need of Roy O's services come midseason. Chris Carpenter threw an awful lot of innings last year, and they're going to be loathe to also push Adam Wainwright very hard. If either of them have any kind of health issue and one of Jake Westbrook and Kyle Lohse don't perform, the Cards could easily find themselves scrambling for starters. Kyle McClellan should never be a rotation option for a team with serious championship aspirations, and while I would definitely like to see Shelby Miller get a shot there are also plenty of scenarios in which you just wouldn't want to chance it. In a case like that, Oswalt would suddenly start looking much more like a necessity and much less like the expensive luxury he is now.
Until that time comes for some team, though, it looks like Oswalt will just head home to Mississippi for now and do whatever it is the ultrarich do when they live in Mississippi. Which, coincidentally, I have no idea what that might be.