Blues Get Back on Track; Finally Beat Predators 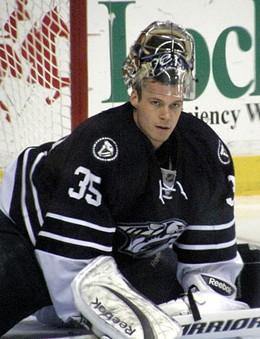 So far this season it had been all Nashville, all the time when the Blues and Predators get together. Nashville's defense, at times capable of being as smothering as the Blues' own, had kept the St. Louis attack under control, and Pekka F. Rinne keeps doing this really spot-on but incredibly irritating Terry Sawchuck impersonation against the Note. The typical outcome was a close game just pulled out by the Predators, often in overtime.
Last night, though, the Blues finally broke through, though it did take every last bit of extra time available. They beat the quickly-becoming-officially-Hated Predators 3-2 in a shootout, picking up two very big points on a night the Detroit Red Wings finally lost a game at home. Unfortunately, the Detroit loss also came via the shootout, so the Blues were really only able to pick up a single point on the Central Division leaders.
Still, a point is a point is a point, and the Blues should be glad for it. They pulled back to within four points of Detroit, an impressively small margin considering the Wings have been almost unbeatable for the past two months.
Even better than just the win was where it took place, as the Blues picked up an all-too-rare road win. The schedule in the second half is heavily tilted toward the away, and the Blues have done little to distinguish themselves outside the environs of the Scottrade Center. The Blues are tied with Detroit for the most home victories in the NHL this season with 26 (though the Red Wings do have the edge in winning percentage), but are just 11-13-3 on the road. Two games below .500 -- or 5 games below, depending on how you want to look at it -- just isn't going to get it done.
In the end, it came down to Jaroslav Halak stonewalling the Preds in the shootout, while Andy McDonald and T.J. Oshie both put the puck past Rinne. Andy Mac and Oshie both made outstanding shots, with Oshie simply outwaiting Rinne then going to the backhand to beat him and McDonald working his speed and a nifty shoulder fake to put the Predator goalie on his heels just long enough to slip a shot through the five hole. You can watch the full video of the shootout over at the Blues' official site; I recommend you take advantage of the opportunity.
The only other really notable occurrence of the night was Chris Stewart scoring another goal, a very nice skate deflection in the first. It wasn't a remarkable goal, but it was an example of just the kind of hard-working positional goal a guy like Stewart should really be scoring on a regular basis. In that sense it was good to see, to see that even in the midst of such a tough season Stewart hasn't stopped fighting to get into the tough areas of the ice down low.
It was a good start to a long and potentially nasty roadtrip for the Blues, who will play their next five games away from Scottrade. The next three games are all eminently winnable, against Winnipeg, Calgary, and Edmonton, but the final two games, at Vancouver and San Jose, could prove to be a pair of very tough tests. Still, if ever there was a chance for the Blues to prove they can win on the road consistently, this is the time to do it.