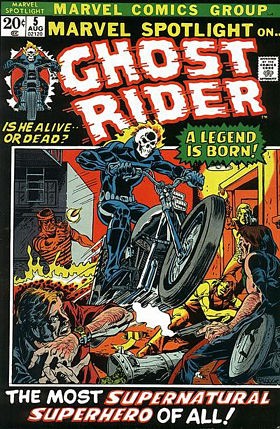 Sometime in the late 1960s, a Missouri-born comic book writer named Gary Friedrich came up with a new character: Ghost Rider, a motorcycle stunt rider who sold his soul to the devil and consequently exchanged his head for a flaming skull. Friedrich sold his own soul -- well, his creation anyway -- to another devil, Magazine Management Inc., without anything nearly as cool as a flaming skull to show for it.

Magazine Management and its successor Marvel Comics have earned millions of dollars off of Ghost Rider comics, posters and action figures, not to mention two movies, the most recent of which, Ghost Rider: Spirit of Vengeance, came out last Friday and has already brought in $22 million.

Friedrich, meanwhile, stopped making money off of Ghost Rider after he left the comics business in 1977, aside from about $17,000 he earned selling Ghost Rider souvenirs at comic book conventions and online. In 2007, when the first Ghost Rider movie came out (which went on to make more than $200 million) and he discovered he wasn't even mentioned in the credits, he sued.

In defense, Marvel countersued, claiming Friedrich was infringing on its own rights to Ghost Rider: Since Friedrich was a writer, not an artist, the merchandise he'd been selling wasn't original, but instead illegal copies of artwork created by people who were on the Marvel payroll.

That suit was settled in November -- in Marvel's favor. Now Friedrich, who still lives in the St. Louis area, is $17,000 in the hole, in addition to his legal bills, and local comic fans, including the folks at Star Clipper, want to help him pay it off.

The dishonorable tradition of publishers screwing comic creators out of vast sums of money has been a part of the comic book industry as long as there has been a comic book industry, dating back to 1938 when Joe Shuster and Jerry Siegel sold the rights to Superman to Action Comics for $130. (At the time, Siegel and Shuster were teenagers, it was the Depression, superheroes were still an unknown quantity, $130 seemed like a shit-ton of cash. The legal battle is ongoing.)

Even after Shuster and Siegel's misfortune became part of comics lore (see The Amazing Adventures of Kavalier & Clay), young creators continued to sign their rights away, including Gary Friedrich, who, in 1972, agreed to give the copyright to Ghost Rider to Magazine Management Inc. and work for the publisher as a freelance writer in exchange for Magazine Management's promise to publish comic books featuring the character.

However, says Charles Kramer, a lawyer at Riezman Berger in Clayton who is handling Friedrich's case, under federal law, copyrights only last 28 years, after which the copyright owners have to file a request for a copyright renewal. If the current copyright owners don't fill out the paperwork, the copyright reverts to the original creator. The initial copyright on Ghost Rider expired in 2000 and, Kramer claims, Marvel never filed for a renewal, which means the rights to Ghost Rider -- and the money from every Ghost Rider commodity produced after 2000, including comic books, posters, action figures and movies -- belong to Friedrich.

Writes Kramer in an e-mail:

As a result, Marvel did not have the rights to the character when they made the first GR movie, and needed to license them from Gary -- but refused to do so and went ahead and made the movie without him, without paying him, and without even acknowledging he was the creator -- despite the fact that even the original comic book acknowledged he conceived the book.

The U.S. District Court ruled that Friedrich had unwittingly transferred the renewal rights back to Magazine Management in the early '70s by endorsing a series of checks from Magazine Management that had a contract of sorts printed on the back which informed freelancers that the publisher held onto all the rights to their work. In addition, Friedrich signed an agreement with Marvel in 1978 that granted the publisher "forever all rights of any kind and nature" to work he did while he was an employee of the company.

Over the course of the legal battle, Friedrich lost his job which means he won't have the $17,000 anytime soon. In addition, he's run up more than $100,000 in legal bills.

Kramer and the legal team have appealed the court's decision. "We are confident," Kramer writes, "that the appellate court will see the errors that were made and correct the trial court's ruling, and will hold that Gary did not transfer his renewal rights." (Friedrich could not comment for this story himself, since the case is still pending.)

Even if Friedrich wins his appeal, he'll still have to go back to court to determine whether he was the sole creator of Ghost Rider or if he should share the credit -- and the money -- with two artists, Roy Thomas and Mike Ploog, who also take credit for the character's genesis. Or even Ray Krank and Dick Ayres, who created the original Ghost Rider in the 1940s, though that character was a cowboy, not a stunt motorcyclist.

Daniel Best, who has been following the case on his blog 20th Century Danny Boy, has suggested that Friedrich's supporters appeal to the better angels of Marvel's nature:

If his appeal fails Friedrich will be a financially ruined man. He stands to lose everything he owns, and ever will own. Naturally the court doesn't care for this, but Marvel might. With the imminent release of the second Ghost Rider movie...Marvel is set to see another financial windfall of multiple millions of dollars. It'd be nice to think that, perhaps, someone at Marvel can see the logic that a settlement would have in this case, if only in the value of good publicity alone.

(It should be noted that in 2004 when the former X-Men artist Dave Cockrum was seriously ill and unable to keep up with his medical bills, a similar outpouring of support from fans prompted Marvel to belatedly give Cockrum co-creator status and pay him a regular, healthy stipend. It should also be noted, though, that Cockrum never tried to sue Marvel.)

Whatever happens, let this be a lesson to comic book artists everywhere: As soon as you come up with the idea for a character, document everything you do, and for God's sake, hire a lawyer before you sign anything.

Books See You in Court!