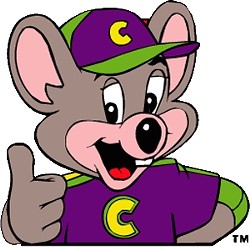 Police were called to a Columbia, Missouri, Chuck E. Cheese at 7 p.m. Sunday night after someone fired at least a half-dozen shots at the rodent-themed children's paradise. Police found six to eight shell casings and three bullet holes in the building. Really, Columbia?

Police have footage from a security cam that shows what they claim is the probable target of the shooting "ducking and running" as the gunman opens fire -- he was not hit, and neither were any of the people in the restaurant.

Police also suspect the incident is related to a string of shootings that have recently taken place in Columbia, including one that happened just last week in front of the Boone Tavern.

Which raises the question, just how stupid are the two parties involved in this? The shooter seems to be following his man but can't put a shot into him to save his own life, and the target knows he's being stalked but keeps going to public places -- like children's restaurants, for example -- despite knowing that every time he sticks his head out it starts hailing bullets.

Maybe these two jokers could agree to meet somewhere outside the city and blast away at each other till either of 'em hits something or runs out of bullets.