New Research Shows that Bad Sleeping is Linked to Alzheimer's 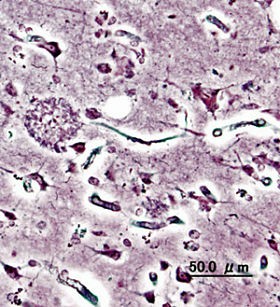 Let it not be said that Paul Shaw didn't warn us. When Riverfront Times profiled the Washington University neuroscientist and self-described sleep evangelist this past fall, Shaw talked at length about the ill-effects of sleep deprivation, particularly interrupted sleep, which could lead to problems with memory and learning.

Shaw works primarily with fruit flies, but a recent study by another team of Wash. U. scientists, led by neurologist Dr. Yo-El Ju, has shown that disrupted sleep patterns have just as nasty effects on the minds of humans.

In a recent study, Ju and her team studied the sleep patterns of 100 people between the ages of 45 and 80, all of whom had a family history of Alzheimer's, over the course of two weeks. They noted that although the research subjects spent eight hours in bed, they spent, on average, only six-and-a-half of those hours sleeping. For the remaining hour and a half, they were either waiting to drift off or woke up suddenly before falling back into a shallow sleep. Those who woke up the most -- five times an hour or more -- were more likely to show the early signs of impending Alzheimer's, namely a buildup of amyloid plaque in their brains.

That remains to be seen, says Ju. This is only the first stage in a long-range study.

"Further research is needed to determine why this is happening and whether sleep changes may predict cognitive decline," she said in a statement.

However, she does have a hypothesis that deep sleep slows down the production of the amyloid plaque. People who keep waking up during the night don't get as much deep sleep; they don't ever have the chance.

Currently, Ju's making plans to enlarge her study, by recruiting more research subjects and replicating other studies that were previously done in animals, such as one that shows that mice who get more sleep produce amyloid plaque at a lower rate. She and her team also plan a closer examination of the effects of genetics and family history.

Ju will present her work at the annual meeting of the American Association of Neurologists in April, in New Orleans. (Is New Orleans an oddly appropriate choice for a meeting of neurologists, or just an odd one? Feel free to discuss.)