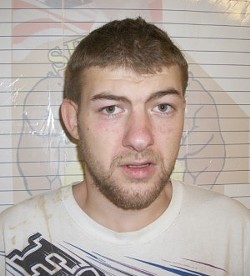 Out in Morgan County, Missouri, between Jefferson City and Sedalia, police were faced with an easily-solved puzzle. They'd been called to the scene of a hit-and-run driver on Highway 135, where Blake Litton, 3, had allegedly darted into the road and been killed by truck around 5:10 a.m. on Thursday.

Except there were no skid marks indicating a vehicle had tried to stop, and the boy's injuries weren't consistent with being run over by a truck. Instead, police allege Thomas Joseph Presley, 21, beat his girlfriend's son so savagely that he died, and then concocted the truck story to cover his tracks.

There are all sorts of sordid details in this case at The Crime Scene, an informative blog that covers crime in Southwest Missouri. Apparently, Presley was in charge of his girlfriend's two children while she was working overnights at a local nursing home.

Lively took his charges to Wal-Mart around 1 a.m., then dropped off mom's lunch. Sometime during the night, the three-year old became cranky -- I wonder why? -- acted up and wet his pants. Lively's response was to beat the poor kid to death.

Somehow it gets worse. He strapped both kids in the car and drove back to the nursing home, where he and the girlfriend cobbled together what for them was a brilliant idea about a hit-and-run. Because the girlfriend -- and mother of this boy -- felt Presley needed to stay out of prison.

Yeah, that's a guy you wanna hold on to. I mean, you have one kid left, he's not gonna pulverize her with his fists, is he? Actually, he does -- the girl, two-years old -- also had bruises and contusions. So not only does the child have take a late-night drive with her dead brother sitting right beside her, at some point she's probably gonna end up on a one-way ride herself.

Fortunately, the police acted quickly. The surviving child is in protective custody, and the mother, Jamie Miller Litton, has also been arrested today. It's the bleakest sort of happy ending.