Think Antibiotics Can Cure a Sinus Infection? Wash. U. Docs Say 'Snot So 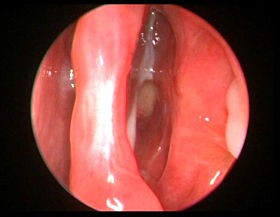 Except for a migraine, there are few things as distractingly painful as a sinus infection. Imagine someone applying several tons of pressure to your face, relentlessly, for days on end. Surely, surely there must be something that can get rid of the pain and the infection, short of cutting your sinuses open and letting the fluid gush out all at once. A drug maybe?

Alas, no, says a group of doctors at the Washington University School of Medicine. In a recent study, published in today's edition of the Journal of the American Medical Association, the doctors distributed pills to 166 patients suffering from sinus infection. Half the pills were antibiotics, the other half placebos. Both sets of patients recovered in approximately the same amount of time.

"Patients don't get better faster or have fewer symptoms when they get antibiotics," Dr. Jay Piccirillo, a professor of otolaryngology and senior author of the study, said in a statement. "Our results show that antibiotics aren't necessary for a basic sinus infection -- most people get better on their own."

So much for the miraculous healing powers of drugs.

Piccirillo and his colleagues have a beef against drugs anyway. They believe that antibiotics are over-prescribed, and that increased exposure to drugs has helped to make bacteria more resistant. "There's a movement afoot, led by the Centers for Disease Control and Prevention, to try to improve the judicious use of antibiotics," explained Dr. Jane M. Garbutt, a professor of medicine at Wash. U. who also worked on the study.

Since one in five prescriptions for antibiotics are written for patients with sinus infections, the Wash. U. team felt this might be a good test case to prove their point.

The 166 patients in the study all live in the St. Louis area and were recruited at the offices of their primary-care physicians. They all reported symptoms ranging from moderate to very severe: pain or tenderness in the face and sinuses and a nasal discharge that lasted from 7 to 28 days. Patients with complications (eg. a simultaneous ear or chest infection) or who suffered from chronic sinus infections were disqualified.

The researchers randomly gave the patients either a ten-day course of amoxicillin or ten placebos, plus a regimen of over-the-counter drugs to ease the various side effects, such as pain, fever, cough and congestion. At various points during the treatment -- the beginning, and then on days 3, 7, 10 and 28 -- the patients had to fill out a questionnaire about how they were feeling, whether they'd seen a recurrence of any symptoms and how much work they'd missed. The doctors called it the Sinonasal Outcome Test-16, or SNOT-16. (Who says medical researchers don't have a sense of humor?)

The researchers did find some slight differences on the SNOT scale between the patients on antibiotics and the patients popping the placebos, but not until Day 7. And even then, the differences weren't enough to be statistically significant. Both groups took equal amounts of medicine for pain and fever and congestion. By Day 10, 80 percent of patients in both groups reported feeling much better, but the antibiotics appeared to have made no difference at all.

"It's a nasty disease," said Garbutt. "People have significant symptoms. They feel miserable and miss time from work. If an antibiotic is not going to be of any benefit, then what is? That's a question we haven't answered yet. But we are working on it."

There's a thought to sustain you during your next sinus infection.