SLU on Trial for Sex Discrimination 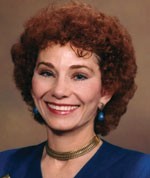 A former dean of Saint Louis University's School of Public Health has sued her old employer, accusing the Jesuit institution of sex discrimination. The battle has now reached the courtroom, with the fourth day of jury trial opening this morning at the Civil Courts Building downtown -- just steps away from the newly acquired building that will serve as the home of SLU's law school beginning this fall.

Plaintiff Connie Evashwick alleges that, shortly after her appointment as dean, SLU reneged on a promise to increase her salary to an amount comparable to those of her predecessors and peers. She also claims her gender played a role in her eventual termination as dean.

Evashwick began her employment with the university in July 2006, assuming the deanship of the School of Public Health. Previously she'd been a professor of health care administration at California State University at Long Beach. Sixteen months after her appointment she abruptly stepped down and was reassigned to a faculty role.

The reason that was given at the time -- at least as reported by the St. Louis Post-Dispatch -- revolved around a controversy over whether to move the School of Public Health to Washington University. In an e-mail sent to the public health faculty, staff and students shortly after the reassingment, SLU Provost Joseph Weixlmann said that he and Evashwick arrived at the joint conclusion that a new dean could better steer the school into the future, according to the P-D report. One of Evashwick's colleagues told the newspaper that Evashwick hadn't been vocal about her opinion over weather to move the school to Wash U.

Regardless of the debate at the time, Evashwick now says her termination was at least partly about gender. To support her claim, her petition states:

"Defendant has historically had a male dominated administration and faculty. In recent years, a male has been President of St. Louis University, a male has held the position of Provost, and all equivalent positions at the level of Provost, except one, have been held by males. Currently, five (5) of the seven (7) Professors in the School of Public Health are males and six (6) of the nine (9) Associate Professors are males, while twelve (12) of the eighteen (18) Assistant Professors are females. In addition, the majority of Deans employed by Defendant over the years have been males."

In addition, Evashwick alleges that SLU paid her less money than it paid the males who held the deanship before she did; that SLU reneged on a promise to increase her salary to a previously agreed-upon amount; that SLU failed to give her adequate fundraising support during her deanship; and that, following her termination, SLU assigned her to a moldy office with a phone line belonging to someone else.

In June 2009, in her then-role as professor of community health and health management and policy at the School of Public Health, Evashwick received the Philip G. Weiler Award for Leadership in Aging and Public Health from the American Public Health Association.

No longer employed by SLU, Evashwick is asking for more than $25,000 in actual and punitive damages.