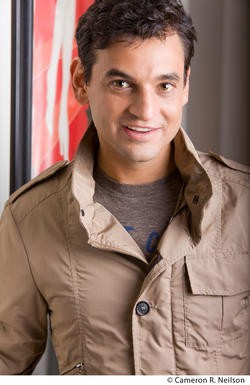 So there's Tony D'Souza hanging out at Hartford Coffee Company in Tower Grove South one day this past December, when his phone rings. And it's Electric City Entertainment, the production company (formerly known as Hunting Lane Films) that optioned the rights for his third novel, Mule, which came out in September.

"I hadn't heard from them in a while," D'Souza recalls. "And they're like, 'Uh, we've got something to tell you.'"

Electric City is a small production company that specializes in indie films; its greatest service to the moviegoers and Internet meme-makers of the world thus far is helping to launch and perpetuate the career of Ryan Gosling in Half Nelson and Blue Valentine. When D'Souza sold the rights to Mule, the tale of a young couple that tries to weather the recession by embracing a career in drug-trafficking, he expected, based on the company's reputation and the modest sum it paid him, that the result would be a flick with a budget too small to get a star like Gosling. On the bright side, they might be willing to settle for an unknown screenwriter like, say, Tony D'Souza.

The news Electric City had that day in December did concern the progress of Mule the film. But it wasn't quite what D'Souza had expected.

"They said, 'Todd Phillips at Warner Brothers wants to make the movie.'"

Phillips is the man responsible for blockbusters such as the Hangover franchise. He is definitely not the sort of promising young filmmaker Electric City had envisioned when it started compiling a list of people to pitch to.

"How do you go from community college baseball to Todd Phillips?" D'Souza asks.

The answer lies in the title of one of Phillips' early hits, Old School: Phillips happens to be a former classmate of Jamie Patricof, head of Electric City. Patricof gave a copy of the book to Scott Budnick, Phillips' producing partner, who loved it and passed it along.

The project is now on the fast track at Warner Brothers: potential screenwriters are currently looking over the book, including the team responsible for The Descendents, who just won a Golden Globe. D'Souza, however, is not among them.

"I have to be realistic," he says. "I've never written a screenplay before. Is Warner Brothers going to spend many millions of dollars on this movie and then get a guy without a single screenwriting credit to write it?"

D'Souza, 36, who moved to University City in August so his wife could attend grad school at the University of Missouri-St. Louis, doesn't mind. He'll still be involved with the movie as a consultant, and besides, he's working on other projects: He just finished the manuscript for his fourth novel. (He also wrote a piece about Occupy St. Louis for Riverfront Times.)

"I'm trying to stay zen," he says. "I'm super, super excited. At the same time, it could still fall apart. I don't want to screw it up."