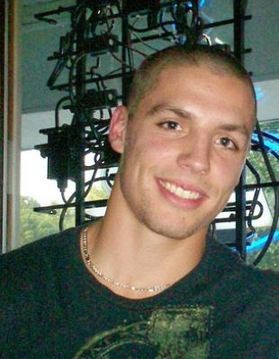 David Perron, you magnificent bastard.
Perron scored twice last night, helping the Blues to a 3-1 victory over the Ottawa Senators, who have suddenly gone from playoff contender to Tom Petty. (As in they're free falling.) Brian Elliott got the win in goal, playing a near-perfect game in his return to Ottawa. He wasn't quite Jaroslav Halak in Montreal good, but he was close. And really, the rest of the team didn't play nearly as well in front of him as they did for Halak against the Habs.
The win was a big one for the Blues, who haven't played particularly well since the All-Star break, and haven't played very well on the road all season. It also put them in a tie for second place in the Central Division with the suddenly unbeatable Nashville Predators (Pekka Rinne, how I curse your name!), and just three points behind the Red Wings at the top. The better news there is the Blues have played two fewer games than both.
Here's the bad news: David Perron was really the only offensive spark the Blues could get going last night, and that isn't exactly a rare occurrence of late. Since the All-Star break, the Blues have won two of three games, but have scored just five goals total. Last night they mustered just 18 shots on goal against the Senators, while allowing Ottawa to take 29 of their own. By all rights, the Blues really should have been in trouble. Brilliant goalie play pulled their collective irons out of the fire, much as it has for a sizable portion of the season, but the lack of quality scoring opportunities was notable all the same.
While this isn't exactly a new trend -- I myself recall having written at least a handful of columns worrying about the Blues' lack of scoring in the early days of the Ken Hitchcock reign -- it is still worrisome. More importantly, it may very well affect what the Blues look to do as the trading deadline draws ever closer.
The question of how to generate more offense is a tricky one. In the past I've criticized this team for lacking goal scorers and not taking enough shots, but that's really not the case anymore. The folks over at St. Louis Game Time, the SBN Blues affiliate, put together a very nice post the other day on the issue and came to the conclusion the Blues really need a playmaker type, someone to pass the puck and set up the scorers, far more than they need another shooter. I have to say, I think I agree with them. David Backes, Chris Stewart, and Patrick Berglund all give the Blues players with the size and strength to camp out near the goal and score if need be; the players to set those guys up are a bit harder to come by.
Perron and T.J. Oshie are both capable passers, but also offer such unique skillsets you hate to try and pigeonhole them into doing only one thing. A big part of the problem is the players the Blues are missing at the moment. Andy MacDonald is exactly the sort of pass-first playmaker the team needs, and Alex Steen, while certainly a very capable goal scorer, has shown the ability to do that as well, but both are out indefinitely with concussions. It's really anyone's guess as to when either might be back with the team.
So looking at the roster, I have to agree with the Game Time guys and say the Blues really need a playmaker more than they need another power finishing type. Where they may try to come up with such a player is a bit dicier, but looking at the fits and starts the Blues' offense has experienced most of the season, the answer is looking awfully important as the season moves into its latter stages.