Which Is the Bigger Pussy? Mountain Lions or State Senator?

In campaign photos, the central Missouri Republican likes to pose in western wear with farm equipment in the background. He boasts in his online biography of being a gun-rights advocate and the "first transportation chair to have driven the state's roads in a car, tractor, and a semi." And there's nothing an Alpha male like Stouffer enjoys better than keeping lesser species in their place, be they homosexuals, welfare recipients, abused puppies or -- now -- mountain lions.

Last week Stouffer filed Senate Bill 738 that allows for the killing of the big cats in Missouri. It's unclear exactly what Stouffer intends with the legislation (the bill itself is incredibly vague and the senator has not returned our calls for clarification). But it appears that Stouffer's bill would create an open season on mountain lions, which have been spotted with increasing frequency since returning to the state in the 1990s after a nearly 70-year absence.

"The truth is they don't belong here," Stouffer said last week in one of the few statements he's made about cougars. 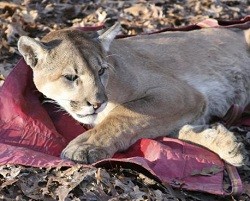 What he hasn't said, though, is that his proposal would fly in the face of current Missouri law that recognizes the mountain lion as a protected species. Moreover, since 2006, Missouri has already had a law on the books allowing the killing of mountain lions. But unlike Stouffer's proposal, current law stipulates the animals be killed only if they are attacking livestock or are threatening human safety.

Joe Jerek, spokesman for the Department of Conservation, tells Daily RFT that his agency was somewhat surprised when Stouffer's filed his bill last week. Under the state Constitution, the Conservation Commission regulates laws on the taking of all Missouri fish and wildlife -- not state legislators.

Jerek adds that all evidence suggests that the 28 confirmed mountain lions sightings in Missouri since 1994 have all been male animals that roamed into Missouri from western states. Moreover, there's no documented evidence dating back to the state's settlement days of cougars attacking people or livestock in Missouri.

That said, one wonders why the state senator feels the urgent need to kill the animals without restriction? Or could it be that behind his rough-and-tumble mystique, Bill Stouffer is really a big, ol' scaredy cat?