Happy Birthday, Charles Dickens, From a City You Hated! 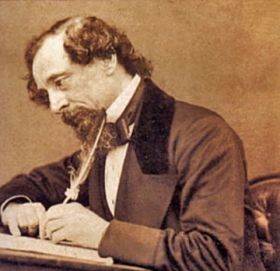 Today's your 200th birthday, and we salute you. It's true you died way back in 1870, so you're probably not aware that we are saluting you. But how amazing is it that people actually remember your birthday -- nay, make a thing of it -- even without friendly reminders from Facebook, because you're not on it?

(We think you would luuuurve Facebook, though. All those interlocking storylines! All that voyeurism!)

We salute you even though you slandered our city and its environs pretty badly in your 1842 book American Notes, which describes your tour of the U.S. earlier that year.

We understand that travel in the 1840s was not the joyous experience it is today. Roads were bad, and you were traveling by stagecoach, which means you got jostled around quite a bit, which might have made you a little cranky. Travel by steamboat might have been a little smoother, but slower, and we understand that it might have gotten a little boring. But really, does it justify passages like this?

But what words shall describe the Mississippi, great father of rivers, who (praise be to Heaven!) has no young children like him? An enormous ditch, sometimes two or three miles wide, running liquid mud six miles an hour: its strong and frothy current choked and obstructed everywhere by huge logs and whole forest trees....The banks low, the trees dwarfish, the marshes swarming with frogs, the wretched cabins few and far apart, their inmates hollow-cheeked and pale, the weather very hot, mosquitoes penetrating into every crack and crevice of the boat, mud and slime on everything; nothing pleasant in its aspect.

You didn't like the weather much, for which we can't really blame you, especially since air-conditioning hadn't been invented yet. But you were so condescending about it! You wrote:

No man ever admits the unhealthiness of the place he dwells in (unless he is going away from it), and I shall therefore, I have no doubt, be at issue with the inhabitants of St. Louis in questioning the perfect salubrity of its climate, and in hinting that I think it must rather dispose to fever in the summer and autumnal seasons.

Really, Chuck? You think nobody who actually lives here, as opposed to visiting for a few days, notices that it gets rather hot and sticky in the summertime? And you think nobody noticed when cholera epidemics swept through town? Well, you didn't like us very much, either; you considered us "pretty rough, and intolerably conceited."

You got a little more cheerful once you actually arrived in St. Louis. You and your wife Catherine stayed in the Planter's House, the best hotel in town, and it met with your approval. "It is an excellent house," you wrote, "and the proprietors have most bountiful notions of providing the creature comforts."

You wandered around town for a while and found Soulard sort of charming -- "some of the houses are very quaint and picturesque....Some of these ancient tenements, with high garret gable windows perking into the roofs, have a kind of French shrug about them" -- and you admitted that the newer parts of town had some potential.

Already, however, some very good houses, broad streets, and marble-fronted shops have gone so far ahead as to be in a state of completion; and the town bids fair, in a few years, to improve considerably: though it is not likely ever to vie, in, point of elegance or beauty, with Cincinnati.

Your sightseeing extended to the Illinois side, because of your abiding desire to see a prairie. You crossed to Belleville and Lebanon and finally achieved your goal. Naturally, you were not impressed.

Great as the picture was, its very flatness and extent, which left nothing to the imagination, tamed it down and cramped its interest. I felt little of that sense of freedom and exhilaration which a Scottish heath inspires, or even our English downs awaken. I felt that in traversing the Prairies, I could never abandon myself to the scene, forgetful of all else...but should often glance toward the distant and frequently-receding line of the horizon, and wish it gained and passed. It is not a scene to be forgotten, but it is scarcely one, I think (at all events, as I saw it) to remember with much pleasure.

Would it be uncharitable -- especially on your birthday -- to say that we felt the same about A Tale of Two Cities when we had to read it back in ninth grade? We hear good things about Our Mutual Friend, though. We might give it a shot, though we doubt it could ever compare to Huck Finn.