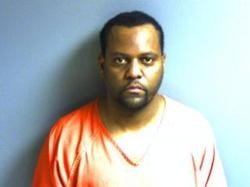 A jury yesterday recommended the death penalty for Vernell Loggins Jr., a trucker from suburban St. Louis who captured headlines in 2009 when his girlfriend's dismembered body was found outside the Pacific apartment complex where the two lived.

A maintenance worker discovered the headless corpse of Stephanie Fields under bags of ice in a trash can that had been glued shut. Her head was later discovered in the Meramec River. Other body parts were discovered in a nearby woods.

During the trial, the jury saw ghastly photos of Fields' body and evidence showing her blood in every room of the apartment, including the ceiling fan. The St. Louis medical examiner testified that it likely took the 25-year-old mother several minutes to die from the more than two-dozen stab wounds.

Surveillance footage of Loggins purchasing a trash can, glue and carpet cleaner from an area Walmart further tied him to the crime. He also reportedly had prior charges filed against him for stalking and intimidation.

Loggins, 39, did not take the stand during trial. A judge will decide next month whether to take the jury's advice on the death penalty or sentence Loggins to life in prison.