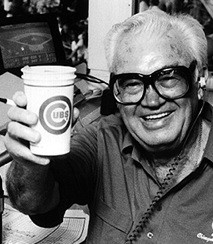 Good news, sports fans. The glory days of baseball broadcasting -- when a commentator could be forgiven for a bit of misbehavin' -- are alive and well.

Why's that? Because this week Fox Sports Midwest announced it will retain Cardinals play-by-play broadcaster Dan McLaughlin for the 2012 season. Last fall, Daily RFT opined that McLaughlin's career in St. Louis was finito after he was charged for his second DWI in just over a year's time.

We felt even more confident about that prediction when the embarrassing details of McLaughlin's arrests came out a few weeks later. When pulled over in August 2010 for the first DUI, McLaughlin was allegedly so shitfaced he'd wet his pants. When he crashed his car in the second DWI in September 2011, McLaughlin was apparently too drunk to unlock the car door and lied to the officer that he lived just a few blocks away and could safely drive home if she let him go.

To paraphrase Mark Twain, our speculation of the death of Dan McLaughlin's career was greatly exaggerated.

FSM general manager told the Post-Dispatch today that he is standing by the 37-year-old whose worked for the cable channel for 14 years. Since the second DUI charge, McLaughlin has confessed to being an alcoholic and is said to attend as many as two or three AA meetings a day now.

"It's perceived as an illness," Donovan said of McLaughlin's alcoholism. "We're trying to support him."

McLaughlin will also return to his occasional segments on the Cardinals flagship radio station, KMOX.

Cardinals president Bill DeWitt, whose club has had its share of DUI problems in recent years (Tony La Russa's booze-snooze in a Florida intersection; Josh Hancock's death; Scott Spiezio's DWI hit-and-run), said that McLaughlin has the backing of the franchise because of the way he's conquering his demons.

The P-D adds that McLaughlin -- who started his career as a skinny kid and ballooned in recent years -- has dropped some 75 pounds since beginning alcohol treatment.