Church of Scientology's "Psychiatry: An Industry of Death" Exhibit Returns to St. Louis 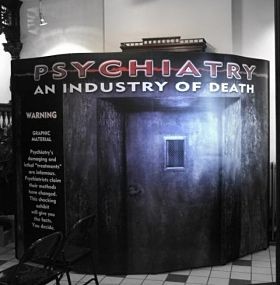 Psychiatry buffs rejoice and praise Xenu! The "state-of-the-art international touring exhibit" Psychiatry: An Industry of Death, sponsored by the Citizens Commission on Human Rights is returning to Missouri for the first time since its appearance at the Jamestown Mall three years ago! You can catch it this Monday and Tuesday (February 6 and 7) in the rotunda of the state capitol in Jefferson City (?!) before it moves to the Griot Museum of Black History and Culture in the St. Louis Place neighborhood in north city.

Should you choose to accept this mission, what will you learn? Well, since the Citizens Commission on Human Rights was co-founded by the Church of Scientology (along with, curiously, Thomas Szasz, described in press materials as Professor of Psychiatry Emeritus from the State University of New York Health Science Center in Syracuse), you can bet it's nothing good.

And you'd be right.

Here's a description from the press release:

Free to the public, it warns about the more than 100,000 deaths in psychiatric institutions around the world each year and over 15,000 deaths of children taking prescribed psychiatric drugs in the United States.

The exhibit, which is being shown internationally in more than 30 countries, depicts human rights abuses by psychiatry and carries statements from health professionals, academics, legal and human rights experts, and victims of psychiatric brutalities. It traces the origins of psychiatry, the role psychiatrists have played in the oppression of blacks and minorities, the roots of their eugenics programs and the pivotal part they played in the Holocaust. It also reveals how psychiatric drugs are behind the spate of school shooting sprees and how millions of federal dollars allocated to screen American schoolchildren for "mental disorders" could increase both child deaths and acts of school violence. The Food and Drug Administration has warned that psychiatric drugs prescribed to children could cause aggression, hostility, psychosis, mania, homicide, suicide and death.

The exhibit will be at the Griot until March 3, but it will take a side trip to the Working Women's Survival Show in St. Charles on February 24-26.