If the negotiations to keep the Rams in St. Louis were a football game, it would be late in the fourth quarter with under two minutes to play. St. Louis would be trailing by a touchdown and starting out on its own 10-yard line.

So, what would make the most sense on that first play of the drive? A bomb down the field to a breaking receiver? Or a hand-off to the running back?

Yesterday St. Louis received the latter -- a feeble hand-off that barely moved the ball forward -- when the St. Louis Convention and Visitor's Commission (and city and county officials) announced a lackluster proposal to upgrade the Edward Jones Dome.

The best part of the $124 million proposal calls for hanging a JumboTron (below) from the ceiling of the dome, not unlike the state-of-the-art scoreboard unveiled a few years back in Dallas.

But even that addition is somewhat flawed because in hanging that giant scoreboard from the roof, the CVC ignores the biggest fault with the dome -- the fact that it has a roof.

In interviews yesterday, CVC President Kathleen "Kitty" Ratcliffe said that making the dome an open-air stadium just isn't feasible as the interior the building wasn't constructed to drain water. "The players would be swimming, not running," she said.

Umm, okay. But how about a retractable roof? Again, let's look at Cowboys Stadium. Its retractable roof opens over an area directly above the field, leaving the stands covered by a permanent ceiling. You might compare it to a car equipped with a sunroof as opposed to a full-blown convertible. And you got to wonder, why couldn't Edward Jones Dome have the same?

Retractable roof or not, the underlying issue is that the Edward Jones Dome is too damn dark inside. (Like playing football in your parents' basement when mom is screaming at you to get the hell-out-da-house because it's sunny and 75 degrees outside.) To improve this, CVC has proposed putting in more windows along the side of the building. We love how the rendering below highlights the rays of sun kissing the field.

Windows are fine. But if you can't cut off the dome's roof or install a retractable one, why not put skylights in the roof to get even more sun inside the stadium? Or how about this:

The roof of the stadium is a fabric of some sort. Isn't there a translucent material you could place up there that would let more light in? Again, here's how they do it at Cowboys Stadium (the benchmark for any new stadia) with its translucent top that lets in light even when the roof is closed. 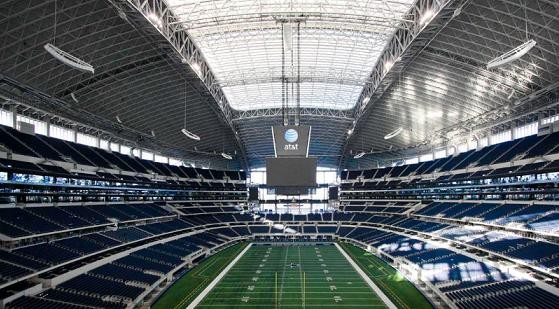 The CVC proposal also calls for replacing cheap seats with more suites and club seats and blocking off Broadway to traffic during games to allow fans more space to mingle. The biggest exterior change to the dome would be a bridge connecting the stadium to a glass lobby on the other side of Broadway. The roof of the lobby would have space for a beer garden, or as the drunken and depressed fans of a 2-14 team might call it, "a launching pad."

BTW: We thought the city destroyed the St. Louis Centre skybridge. Apparently not. They were keeping it all this time in hopes of gluing it onto the Ed. Who knew?

CVC and civic leaders will no doubt defend their proposal for being practical. Someone, after all, has to pay for all these improvements. The current plan would ask the Rams to cover 52 percent of the costs, which CVC says is the average that NFL team pay for improvements. (CVC should actually be commended here for demanding that the Rams -- who've had the "most scandalous" deal in the NFL since arriving to St. Louis -- ante up.)

It's unclear how the city and county would come up with the remaining $59.5 million. Voters would have to approve any new taxes to pay for the facility. But here's the deal. As long as we could be on the hook for that much money, is it that more of a collective burden to cough up a little more to do it right?