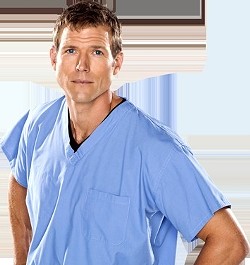 The online word game Words With Friends can do anything, it seems. Humble the mighty? Check. Bring two lonely souls together? Yup. Make me get a cell phone? No, not yet. But it is being credited with saving a life -- from across the world.

Beth Legler of Kansas City, Missouri, had been playing the game with Georgie Fletcher of Queensland, Australia, for a few years. During a recent match between the two, Georgie had delayed making her next move for several days. Legler inquired politely about the stalling tactic through the game's built-in chat feature, and Georgie replied that her husband, Simon, had been having some health problems that were keeping her away from the game. Legler, a nurse, inquired about Simon's symptoms, and when Georgie replied, Legler sought advice from her husband, Larry, a doctor.

Dr. Larry's advice to Simon? Get yer Aussie ass to the hospital -- you're on the verge of a heart attack.

Simon did indeed go to the hospital, where it was discovered that his main coronary artery was 99 percent blocked. After emergency surgery, he's made a full recovery. The two couples meet for the first on the television show "The Doctors," and they'll share both sides of their story on the Thursday, February 2, episode, which airs locally at 10 a.m. on KPLR 11.

It sounds like Dr. Larry's the real life saver here, but why quibble with a happy ending. "The Doctors" is co-hosted by Dr. Travis Stork, formerly  the titular bachelor on season eight of reality TV schlockfest "The Bachelor," and before that a graduate of Parkway West High School.