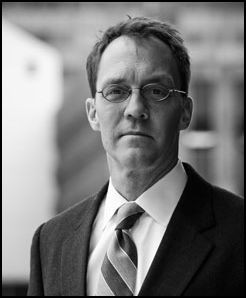 In just a few hours, lawyers of Paul McKee will be trying to convince a state appeals panel to let the developer move forward with his $8.1 billion-dollar plan to rejuvenate North St. Louis. (Click here for a primer on the situation).

The stakes are high, and the issues are rather technical, what with TIFs and statutory definitions and cost-benefit analyses, etc. We'll get into all those things after the hearing.

But for now, we must admit that the pre-appeal briefs have been wicked fun to read, thanks to the tart little back-and-forth between McKee's lawyer, Paul Purcielli, and plaintiff's attorney, Bevis Schock.

Puricelli's writing style has always been all-business. He avoids taking blatant swipes at his opponents.

However, Schock -- a hard-core conservative on the board of Rex Sinquefield's Show-Me Institute -- exhibits no such scruples.
He throws in old jokes, he quotes Shakespeare and even openly impugns the character of his adversaries.

You can read in Schock's brief in its entirety here, but it's perhaps just as amusing to read Puricelli's indignant reply.

Here's an excerpt, in which Puricelli expresses displeasure that Schock and co-counsel: What's interesting is that Puricelli doesn't even acknowledge Schock's most scathing remarks, which had appeared in the conclusion of his brief:

Churchill described Russia as "a riddle, wrapped in a mystery, inside an enigma."

Why would they submit such documents?

Their Amended Initial Brief has an earnest, almost Norman Rockwellesque tone. For example, at p. 14: "The Redevelopment Ordinance contemplates the reformation of 1500 acres in North St. Louis into a mixed use community that will include state of the art infrastructure, new schools, parks, residences, office buildings, theatres, shops and other uses."

Why would do they make such statements?

One is reminded of the old Wall Street joke. How does one know a Wall Street Investment Banker is lying? Because his lips are moving.

One is inclined to think that when a shrewd businessman submits a proposal which any shrewd businessman would know has no basis in reality, that then regardless of protestations to the contrary there is something going on other than what is explicitly stated. But perhaps it is not a riddle, wrapped in a mystery, inside an enigma. Perhaps the explanation comes from an obvious inference that some of these incentives, whether the tax credits or some aspect(s) of the TIF, would be heading to Northside's pockets whether the project succeeded or not.

But for the efforts of Respondents' team, they would have gotten away with it.

Oh golly. We'll see if the judges take kindly to that kind of grandstanding...