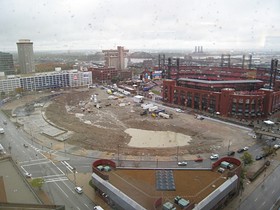 Way back when in the magical days of the early 2000s, when Busch Stadium III was still just a twinkle in the eye of Bill DeWitt, the Cardinals proposed a new development next to the proposed stadium. It was to be called Ballpark Village, and it was going to be glorious.
The highlight of the proposed development was supposed to be a brand new, state of the art Hall of Fame and museum dedicated to the St. Louis Cardinals. A restaurant was planned as part of the museum, along with rooftop seating that looked directly into the park itself. The rest of Ballpark Village was supposed to have plenty of commercial space, and the potential revenue windfall for the city would have been substantial. Ballpark Village was going to be something really great, and the Cardinal museum was going to be the central jewel in the crown of a revitalized downtown.
It's been a decade since those grand plans began to circulate around. The Cardinals have finally opened up their Hall of Fame museum. Online.
As far as imaginary museums go, I suppose this one is pretty good. It really is impressive just how much lore has been accumulated around this one franchise over the years, and to see so much of it collected together is nothing short of remarkable. Jerseys, bats, shoes, trophies, all well represented, all featuring in some of the most memorable moments in Cardinal history.
Still, considering one of the videos is the museum curator, Paula Homan, showing off a collection of 2011 items in a storage area, you kind of get the feeling you're missing out on some of the experience, you know?
You can visit virtual exhibits of all different types of memorabilia, viewing photos and watching videos all the live long day if you like. Really, I suppose it isn't a terrible experience. There's even a section entitled 'Question to the Fans', in which Cardinal fans are asked a question about their fandom or their personal experience. This week's is where you were when David Freese hit his walkoff homer to end game six of the World Series.
Look, I don't want to lay all the blame for the failure of Ballpark Village to materialize solely at the feet of DeWitt and the Cardinals. There are plenty of other factors which have contributed to the development retaining the word 'proposed' far longer than you would ever hope, not the least of which was an economic crash which, unfortunately, hit the real estate sector hardest of all.
Still, I have to wonder who thought it would be a good idea to launch an online reminder of that giant empty patch of land next to Busch Stadium that once upon a time was supposed to be something great.