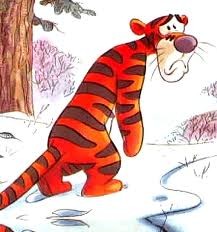 This past weekend, the Missouri Tigers traveled to Waco, Texas. The played the number three Baylor Bears. They beat the number three Baylor Bears. And they left Waco on their way to a #2 national ranking and a whole heaping helping of hype.
All in all, a pretty good weekend.
Against that backdrop, perhaps it was inevitable. After all, if ever there is a time ripe for a trap game it's the game after you beat a top five team on their court to take a huge leap forward in the standings.
The Tigers' reign as the number two team in all the land lasted approximately two days. The rankings came out Monday, and by the time the game clock hit all zeroes Wednesday night in Stillwater Mizzou had lost just their second game of the year to an unranked and struggling Oklahoma State team.
All in all, not a great Wednesday.
So what happened to Missouri? The same thing that happens to most teams whenever they get bitten by the trap game: the Tigers got a little complacent, and the Tigers got lazy.
Frank Haith himself said after the game, "I thought that our focus was not where it needed to be in order to win a game like this on the road." And honestly, that was exactly the way it looked to me, too.
The Tigers' normally stiff defense collapsed like an underbaked souflee, allowing Oklahoma State to shoot 59% from the field. It was the first game this season in which the Cowboys had shot better than 49% against a Division I opponent. Far too often Mizzou players were out of position on defense, the help was late rotating over all night, and the Cowboy shooters rarely had to contend with a hand in their face on virtually any shot.
Worse than the defense, though, the Tiger offense stalled mightily. They shot just 40% from the floor, and a combined 0-for-6 from beyond the arc by Phil Pressey and Kim English made for a long night of listening to the iron clang. Marcus Denmon, possibly -- no, probably -- the best overall player on the team, was only able to muster a 25% shooting percentage and was held to 17 points on a night when he had enough chances to score double that many with his usual touch.
Ricardo Ratliffe was the Tigers' best player last night (as he has been quite often lately it seems), pouring in 25 points and pulling down 12 rebounds, but even he struggled to put the ball in the basket. Ratliffe is still on pace to break the NCAA single-season record for field goal percentage, but he made only 10 of his 17 shots last night. Credit the Oklahoma State defense to a certain extent; they certainly played the Tigers tighter than they are used to and it showed. Even so, there's really no good way to say Mizzou shot the ball like shit for the game.
That's been the common thread in both of the Tigers' losses this season; when they lost to Kansas State the second game of the conference schedule they just couldn't buy a basket for long stretches of time. Different game last night stylistically, of course, but the same exact story.
The worst thing about the loss was it provided Kansas a cushion atop the Big XII standings, with the Jayhawks currently sitting at 7-0 in conference play. Missouri still has the better overall record, but it sure would be nice to see the Tigers win the conference their last season in it. As it stands now, that's going to be very, very tough. Kansas just doesn't lose at home.
This loss will probably drop Mizzou back down into the 7-8 range, maybe a little better or worse depending on how the rest of the top 10 plays over the weekend. There's still plenty of time left for the Tigers to make a push back toward the top of the standings before the season comes to a close, but they just can't afford any more letdowns like this. There is probably still at least one legitimate loss left on the schedule; the Tigers absolutely have to avoid dropping any more bad games the rest of the way.