What's Next for the Arch? 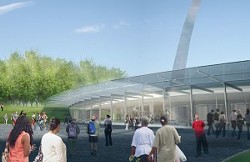 These are exciting times for the Gateway Arch. Our local icon is four years away from its 50th anniversary, and it's scheduled to have an entirely new look by the time that date rolls around. The City+The Arch+The River international design competition sought plans to complete architect Eero Saarinen's original design for the Arch grounds, and also to better integrate the site into downtown St. Louis and involve the Illinois side of the river as well. Michael Van Valkenburgh Associates took the prize in that competition in 2010. The entire project is slated for completion on October 28, 2015. With just more less than four years to go, what's the state of the project so far?

You can find out this Wednesday night.

The City+Arch+River 2011 report to the community takes place at 6 p.m. Wednesday in the Ferrara Theatre at America's Center (701 Convention Center Plaza; www.cityarchriver.org). This free, informational presentation will be made by project leaders (Tom Bradley, Superintendent of the Jefferson National Expansion Memorial, and Micheal Van Valkenburgh are both scheduled to speak), and it will provide information on plans for the park that will span I-70 and the new-look entrance for the Museum of Westward Expansion.

A quick peek at the project details on City+Arch+River's website reveals that in addition to the Museum of Westward Expansion expanding by about 50,000 square feet, a glass roof is planned so that natural light will shine in the underground space. It's a radical revision, to be sure -- I just hope they keep the giant stuffed grizzly bear that's been fascinating kids for the past 45 years.