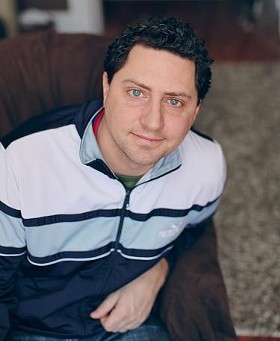 With a dry and nasal delivery, Matt Conty tends to saunter through his material, tossing in ironic urban lingo like a gifted-but-bored ESPN anchor.

But while he's all nonchalance on stage, fuck with him at your peril. He relishes the chance to veer off-script, and his insults are viper-quick.

In addition, the 35-year-old Conty has become something of a Jose Oquendo in the St. Louis comedy scene. He does it all, from emceeing and featuring, to organizing his own monthly show at Brennan's, to blogging, to coaching newbies on how to improve.

He'll be opening for Louis Katz tonight through Sunday at the Funnybone in Westport Plaza.

Daily RFT: On your bustling new blog, Wtfatherhood, you've dialed in 106 posts of at least 1,000 words over the last four months alone. Are you trying to win a contest?

Matt Conty: I think a book deal, or a writing job, like yours, would be a short term goal.  Now I am thinking about how I can get you fired.

No, but your diligence is impressive. Is there some other blogger you're trying to emulate?

The Greatful Dead.  Not the insane amount of coke or heroin, or 48-minute songs, or hummus. But they created their own market without a lot of industry influence, and I want to use this blog to create my own audience.  Ideally, I could book some more unique venues based on readership of my blog in a certain area, without mainstream credits.

Has the writing affected your comedy?

Yeah, it forces me to write about mundane shit, and try and think of a funny angle on it.  And I was having problems getting material stage-ready, so this helps....I think. Maybe not.  Honestly, I'm just waiting for Twitter to raise its character limit to 3,000, instead of 140.  I will be a fucking king when that happens.

It's called "Wtfatherhood," but sometimes you write about other stuff, such as "the urban rednecks" in your 'hood.

This neighborhood we live in, people are always like, 'Ah, it's all ghetto.' What they really mean is, 'There are a lot of black people down there.'

But the problem on our block - there's no black people, it's just these two ex-hookers and their mulleted-out boyfriends. God bless these guys, they're the most forgiving guys in the world, dating two ex-hookers.

We hear these guys outside every night. "You're  a ten-dollar whore!" You know? Like, that's why he doesn't like her. Because she's the cheapest prostitute on the street.

Yeah, because we have three dogs. And they love the hookers' house because it's full of weird smells and used stuff, you know. Like corks. "Lady corks."

It's a dog paradise. Every time we open the door, they run over there and sniff like there's a line of doggy coke, they can't get enough.

And the hookers have a dog, that poor thing. It got in a fight with our dogs. So the other lady that lives in there - she's not a hooker, she's like their aunt or something -- she approached me one day and was like, 'Your dogs attacked our dog. What are you going to do about it?' Like she was trying to get cash out of us on the street.

So we took her dog to our vet. And the vet didn't see how our little Boston terriers could've put that wound on its head. The vet said the real problems were that it had fleas and its hair was just falling out.

Such a great neighborhood. And you brought a child into that world. 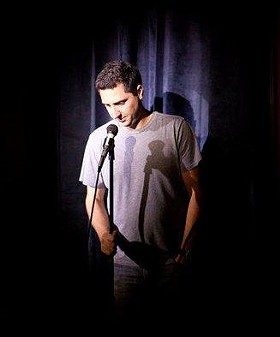 Here's what I know. Nobody gives a shit about your kid. My daughter is beautiful. But you haven't met her, and you don't care. You're not losing any sleep over it, right?

You've probably said to a parent, 'You have the cutest baby ever,' while in your head, you're thinking, 'What is that thing? That's not a cute baby.' But people say that to us and I'm like, 'You know what? You're right. You've got a good head on your shoulders. She IS a good-looking kid.'

Is she causing you problems crying at night and keeping you up?

Like the hookers? Well, there's been three nights when we thought, 'What the hell is wrong with you.' It's horrible. And you resent the kid. It's like, 'What do you want? There's nothing else to give you.'

Do you know what a colicky baby is?

Is that when they have a lot of gas in their tummies?

No one knows, it just means, 'My baby is psycho and cries all the time, and we're hollow shells of what we once were.'

If you ever see a couple and they look like ghosts, and their conversations are like, 'Fuck you.' 'Fuck you, too.' 'Fine, I'll change her.' That means they have a colicky baby. That's the definition.

Thanks. But no, I love it. I absolutely love it.

What's your day job, by the way?

I work for a medical device company. It's a real small start-up, so I've been comptroller, I was financial manager. I actually have a finance degree.

But eventually we got to the point where we didn't want the comptroller on the road four nights a week, cranking out dick jokes. So they put me into operations.

There's not a lot of people with finance degrees who are also funny.

Well, nobody's ever done the math. There's not a lot of comics with degrees. Why even focus on one area?

Depends on how you assess it. Numbers-wise, I think it's pretty slow, which I expected. But the shows have been amazing.

The weird thing about comedy especially in a small room like that - if you like the guy, you're ten feet away from him, then after you meet the guy and you have a drink with him. You're right there with the entertainer.

The whole thing with comedy is that circular energy. If you've been in a room where everything's hitting, bouncing back-and-forth -- when it's good, it's a hotbed of laughter that feeds on itself.

But it can go either way, it can be uptight. That room can be a ball-breaker. You've probably seen me bomb down there. I have to embrace the crowd.

I'm telling you, that room should boot-camp for comics. You got [the bartender] trying to figure out how to get the light back on that turned off for no reason. Smoke is coming through the vent. Somebody is dropping a deuce in the bathroom, which is right behind the stage, so you have to announce the next 300 shows while that guy works things out in the bathroom.

You seem to thrive on crowd-work. I've seen you go into assassin-mode down there.

Well I don't call that crowd-work. I call that 'situation-work.' I never ask people, 'Hey, where you from?' I try not to fish for it. It will happen. It's a roomful of humans drinking. There will be shit going on.

I've worked places where, if the Cardinals game is on, [management] will not turn the TV off. That's not crowd work. That's addressing poor decisions by management.

But is that spontaneity more exciting, for you?

It's great to create a true moment, where the only people who shared it were in that room. But it's kind of looked down upon in our industry, especially here. It's a very material-driven and TV-credit-driven scene here.

A club sees a lot of spontaneous, situational work as, 'You never know what's going to happen.' So I have to prove to them that I have material, in case it's not hitting. So I love when situational stuff happens, but it's gotten ingrained in my head that I've got to a plan.

There a lot of young comics in this town. Any advice for them?

You're an entertainer. And you're trying to entertain a group of people. That's your main job. You want to develop your voice. But you're not going to do that because you piss people off and stick to your guns.

Most of the time, when you have this young comic doing a rebel thing and everyone hates them, it's not even them. It's a nervous reaction to being on stage. It's like, 'I'm going to do four cunt jokes and tell someone to fuck themselves.' And then they're like, 'Ah, I won! I'm a crazy rebel.'

You got to remember: If you're captivating, it doesn't matter how you're doing it. But you have to be captivating.

And what do you think about St. Louis comedy crowds?

It's funny, the way they show their appreciation. During the show, they're laughing but they're not going crazy. Then after the show, they want to take pictures with you and they're like, 'Oh it was great!'

I've seen that enough that I know it's not patronizing.

It's as if they're watching a movie and they're being very respectful of the craft.

I mean, there are nights where it's a circus and it's great. But a lot of times, I think they're trying to be respectful. And it's like, 'Hey. This is a comedy show. You can just let it go!'