Whats Up Is Down But Not Out -- Yet

Jay Swoboda became a social activist on a whim. The economics major spotted a woman on Washington University's campus who was "really cute." Swoboda wanted to get to know her so he decided to volunteer alongside her at STONE Soup, a student organization that provides food and aid to the homeless, and he discovered he liked the work.

"I grew up on a farm, so I was more familiar with homeless animals than homeless people. Meeting these people was a real wake-up for me," he recalls. While on a trip to Boston with AmeriCorp, Swoboda saw an issue of Whats Up, Boston's social justice newspaper that was distributed by a network of paid homeless and formerly homeless vendors, and thought St. Louis could benefit from a similar publication.

That was ten years ago, an anniversary Whats Up St. Louis will mark on February 1. The date may also sound the death knell for the publication.

Swoboda has imposed a deadline of January 31 to raise $5,000 from the community -- along with an increased awareness of the magazine and its mission -- or he'll shut down Whats Up. The money is needed to pay some outstanding debts, but it will also show that there are people in St. Louis who value what the magazine brings to the community. The validation is as necessary as the money, because a decade of working with St. Louis' homeless has taken a toll on Swoboda mentally and spiritually.

"When I started the magazine, I always envisioned that in five years I'd see a vendor who would have no idea who I was, because I'd handed it off to new leadership," he says during an early morning phone call. "I've had vendors killed, locked up, I've been robbed by them." He pauses. "I notice I have to remind myself to be compassionate and be patient." 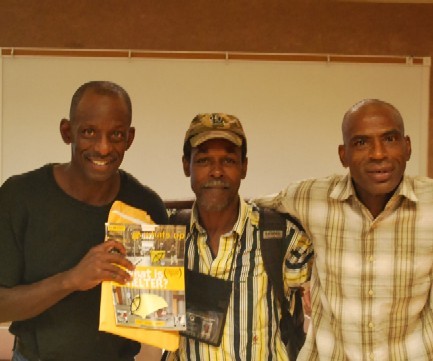 Whats Up currently has 25 to 30 vendors selling the paper at locations throughout the city, and Swoboda estimates about five to fifteen of them actively sell on a weekly basis. The paper costs a dollar -- each issue is emblazoned with a warning that vendors will not ask for more than that -- and the vendor keeps 75 cents, with the remaining twenty-five cents going to the organization. (With an average print bill of around $1400 per quarterly issue, the paper breaks even most of the time.) All of the vendors have a license and photo ID that shows they're in good standing with the city and the paper, but this is no deterrent to vendors playing fast and loose with the rules, a fact Swoboda readily concedes.

"In the early days, we went out hard and signed up anybody who was interested, without doing any support beyond giving them a job. My rule was direct economic opportunity: You could go out today and make money today. I signed up hundreds of vendors I never saw again." If he had known then what he knows now, Swoboda admits he should have done things differently. "I would have created more of a vendor support program. Some of those people did harm to the organization with that badge." Even today, there are people who take advantage of the program, but Swoboda is resigned to that fact. "There's always gonna be schemers, I can't control that," he says.

Determined and hard-working vendors may make enough to get off the street, but that's no sure thing for the working poor. Scraping together enough money for a deposit on an apartment is often an insurmountable task, but they might make enough selling the paper in one day to afford a cheap hotel room. This breeds a self-replicating cycle of vendors working to pay for the next night's stay, which keeps them in the vendor program indefinitely.

And that wasn't Swoboda's original vision. The plan was for Whats Up to help homeless people gain work experience and enough money so that they could start moving up the economic ladder. Instead, Swoboda has some vendors who have been stuck in the cycle for eight years, which makes him feel like he's more of an enabler than a problem solver.

Which is why he's either going to pull the plug, or use the fund-raising drive to revitalize Whats Up from street level on up. Going forward, he'd like to limit vendors to a one-year time limit: "They either move up, or they move on."

Swoboda also plans to recommit himself to the magazine and the vendors. "I'm gonna be an active executive director to raise the money. I want to use the momentum to get together more volunteers and to energize the troops. If people are willing to support it, we're willing to support them. We're a 501c3 organization in good standing, so any donations are tax deductible. People can donate online through PayPal, or by sending donations to the office (906 Olive Street, suite 1212; 314-241-7744 or www.whatsupstl.com)."

But more pressing than the money is the need for a new crop of volunteers, particularly people with skills that non-profits and magazines can use (he cites an immediate need for an editor and a copy editor).

And if you don't have those skills or the disposable income, Swoboda is still open to any and all ideas if Whats Up meets its financial goal and begins its eleventh year in the Gateway City. "Anyone can help organize a fundraiser. If you're a musician or an artist, or a trivia fanatic, or even just have a wacky idea, you can help."