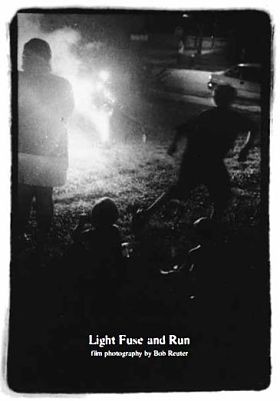 Bob Reuter's got a band (Alley Ghost), a radio show (Bob's Scratchy Records on KDHX (88.1 FM)) and now a book of photos, Light Fuse and Run, that made its debut on the St. Louis bestseller list this week at number 6. This is Reuter's second book and features photos (from film! how amazingly retro of him) mostly of people and things in his South City stomping grounds.

Back on the list this week is The Light Bringer, a supernatural police thriller by two local cops, Chris DiGiuseppi and Mike Force; Amanda Doyle's super-guidebook Finally, A Locally Produced Guidebook to St. Louis by and for St. Louisans, Neighborhood by Neighborhood and Freedom, by super-famous former Webster Grovian Jonathan Franzen.

1. Bossypants by Tina Fey 2. The Sense of an Ending by Julian Barnes 3. The Light Bringer by Chris DiGiuseppi and Mike Force 4. Finally, A Locally Produced Guidebook to St. Louis by and for St. Louisans, Neighborhood by Neighborhood by Amanda Doyle with Kerri Bonasch 5. Battle Hymn of the Tiger Mother by Amy Chua 6. Light Fuse and Run by Bob Reuter 7. Freedom by Jonathan Franzen 8. The Guernsey Literary and Potato Peel Pie Society by Mary Ann Shaffer and Annie Barrows 9. 1Q84 by Haruki Murakami 10. Cleopatra: A Life by Stacy Schiff