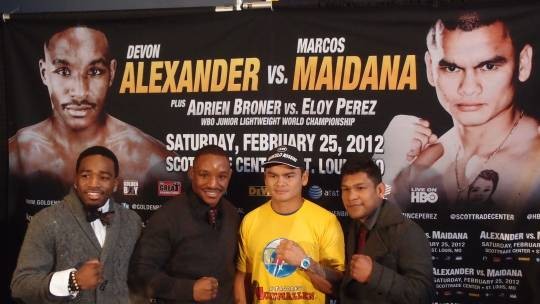 Their fighting styles are about as different as their fashion styles. This became clear on Friday as Devon Alexander and Marcos Maidana appeared at Scottrade for their fight's first press conference. On one side of the podium sat Devon Alexander, the St. Louis hero, smiling and shining, a maroon tie under a dark chocolate sweater, a thick and sparkling watch on his wrist, gradient brown shades over his eyes. On the other side sat Maidana, Argentina's best fighter, in a yellow t-shirt, black zip-up jacket, and flimsy black cap.

"We're bringing a killer over here to Devon's hometown," said Kevin Cunningham, Alexander's trainer. "But Devon is one of the most skillful fighters in the game. Devon is going to slay the killer on February 25."

It's unclear how much Maidana, who doesn't speak a lot of English, understood Cunningham's declaration. But given the cheers and and claps that filled the room, there's no doubt he got the sentiment.

Maidana (31-2 with 28 KOs) is a fearless brawler with terrific punching power and a strong chin. Alexander (22-1 with 13 KOs) is a smooth boxer with outstanding footwork and fast hands. It is a conflict of styles that will likely produce an entertaining contest, a stylistic tug-of-war with Maidana stalking Alexander in search of powerful connections and Alexander dancing around Maidana, bouncing in and out of reach with jabs and flurries. At least that's how it looks on paper.

"Maidana is a good fighter," said Alexander, who will train for the fight in St. Louis. "He'll be trying to tear my head off. That's what he's supposed to do. He'll be coming. But I'll be coming too. We're gonna be a couple of throwers."

In his last fight, Alexander defeated Argentina's second best fighter, Lucas Matthysse, a tough and talented slugger with heavy hands. Alexander took his opponent's strongest punch, which knocked him down in the fourth round, but he stuck-and-moved enough to come away with a split decision win. Maidana, Cunningham told Daily RFT before the press conference, is a stronger puncher than Matthysse, but he is less technical. His feet are slower and his strategy is often more direct and vicious.

Both fighters have lost only to elite competition-- Maidana dropping close decisions to Amir Khan and Andriy Kotelnyk, Alexander dropping a close decision to Timothy Bradley. Each will be debuting at 147 lbs. after good runs at 140. For each man, this bout is the first step toward contention for a welterweight title.

They'll probably need to put on a great show if they intend on outshining the two fighters opening for them on HBO's (non-pay-per-view) Boxing After Dark card. Those two fighters, Adrien Broner and Eloy Perez, are undefeated rising stars in the super featherwieght division. And their styles may contrast just as much as the headliners'. Broner (22-0 with 18 KOs) is a flashy and cocky fighter, who dances like Roy Jones Jr. and hits with the power and swiftness of a wildebeest stampede. Perez (23-0-2 with 7 KOs) is a crisp technician who knows how to weave around a ring.

St. Louis boxing fans are likely familiar with Perez. In 2009 he handed Dannie Williams his only loss. Williams knocked him down twice before Perez rallied to a unanimous decision. Broner, a Cincinnati native who has known both Williams and Alexander since they were all young'ns tearing through the midwest amateur boxing circuit, vowed to avenge Williams' defeat.

"I feel like you beat one of my brothers, so I gotta do you bad," he said. "I can tell he's out of shape. Look at him." It was hard to tell whether Perez, a coat bundled over his shirt and tie, was in fact out of shape. Though his track record, full of ten round decision victories, suggests that not even Broner actually expects him to be anything less than fit. But Broner is a showman.

"He gotta get in shape. I'm already in shape. You could do laundry on my chest," he said. "I'mma get in his ass like Preparation H."

The room of people, including Perez, burst into laughter. Broner made a point to contrast his knock out percentage against that of his opponent.

"He's a good fighter, 23-0, a couple knockouts," he remarked with a smirk. "He's a feather fighter in the featherweight division. And that's not a good combination. Especially when I punch like a middleweight."

Perez didn't to much talking. He thanked Broner for the title shot and said he was excited to fight in St. Louis, a city with a rich boxing history. Then he addressed a comment Broner recently made, calling Perez, a Mexican-American from southern California, "this bean burrito eating dude."

"I have one message for Adrien," he said. "I'm not a bean burrito kind of guy. I'm a lasagna kind of guy."

After the press conference, Daily RFT asked Perez if he was concerned about Broner's punching power, which has generated ten first round knockouts.

"I don't think anybody has more power than Dannie Williams," he said. "And I took his best shots."