Wash. U. Researchers Discover Why We Love Fat So Darned Much 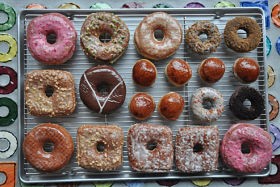 So we all know, deep in our hearts and thighs and especially our tongues -- and despite all those resolutions we made a couple of weeks ago -- that fat is one of the most awesome things that can ever happen to a piece of food. But it is the goal of Science to illuminate and explain the mysteries of life and nature, and so a group of scientists at Washington University School of Medicine has taken the first step to discover why we love fat so much.

"My key interest in fat is to know why we crave fat," says M. Yanina Pepino, one of the scientists who worked on the study, which appears in the current issue of the Journal of Lipid Research. The answer, or at least part of the answer, lies in a gene called CD36, which is connected to the taste buds. People who make more of the CD36 protein have an easier time detecting the presence of fat in food.

This does not mean, Pepino stresses, that they like fat more. "We have to learn what the signal means," she says. "It could be how much fat they need to absorb to get the signal of satiety. This is just the tip of the iceberg, the beginning of the story."

Ultimately, the scientists want to learn how people's ability to detect fat in food determines what and how much they eat. Earlier studies in mice showed that the more fat an animal ate, the less sensitive it was to fat, which meant it would have to eat more fat to feel satiated which means -- well you can probably guess what it means: Fat mice.

This, Pepino observes, is a problem in modern America where, in the past 30 years or so, fat has had more of a presence in the average person's diet.

"Fat in itself is not bad," she says. "In terms of evolution, fat is an important nutrient. Some fat is only obtained through the diet. Our system developed so that there are many, sometimes redundant ways to let us know that fat is coming. If you're deprived of fat, that leads to big problems. But now we live an environment with entirely too much fat."

The senior investigator in the project, Nada A. Abumrad, was the first to discover that the protein produced by the CD36 gene affected the uptake of fatty acids.

In their most recent experiment, which showed that some people can, in fact, taste fat better than others, they studied 21 subjects, all of whom had a body mass index of at least 30, which qualified them as obese. But the subjects produced varying levels of CD36.

Each person in the study had to drink from three cups. One cup contained a fatty oil. The other contained liquids that had the same texture as the oil but were fat-free. The scientists lit the room with red light and had the research subjects wear nose clips so they wouldn't be able to see or smell any differences between the three liquids. They ran the experiment several times with different levels of fat in the first cup to see what was the minimum amount of fat the human palate could detect.

In the future, Pepino wants to run a similar study, only with leaner subjects. They also want to determine how a person's diet affects -- or is affected by -- how much CD36 he or she produces. But next up, the scientists plan to use brain-scanning tools to see what pleasure centers in the brain are activated by the taste of fat in the mouth.

We're pretty sure there are a lot.