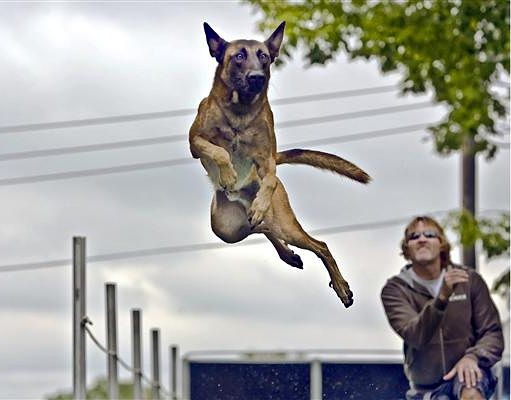 Now that Albert Pujols has left us, you may think that the title of Greatest Athlete in St. Louis is up for grabs. But you'd be wrong. The new Greatest Athlete is a world-record holder and a force to be reckoned with in his chosen sport. He lives quietly in unincorporated St. Louis county, seemingly unaware of his talent and his fame, but that may be about to change.

Meet Baxter, one of the nation's greatest dock-divers.

Baxter is a three-year-old Belgian Malinois. Dock diving, says his trainer Tony Lampert, is one of the fastest-growing dog sports. "You have a 40-foot dock," Lampert explains, "and the dog runs off the dock and jumps into a pool of water. You measure how far the dog jumps."

Last May in a competition in Little Rock, Arkansas, Baxter leaped 29 feet, 7 inches, to set a new world record. This Saturday, January 14, he's going to show off his prowess again in the national finals of the Purina Incredible Dog Challenge in San Diego. He came in third in the regional finals last October. You can cheer along from home by tuning into KSDK-TV (Channel 5) at 4 p.m.

Lampert, a trainer for Sit Means Sit Dog Training in St. Peters, adopted Baxter from a breeder in Peoria when the dog was five months old. His father was a police dog in Chicago and Baxter had been slated for a career in the military, but his officer was deployed before Baxter was ready to join him.

Man and dog quickly became inseparable. Lampert saw Baxter's potential as an athlete and, because the dog loved water so much, decided to start with dock diving.

"The key to dock diving," says Lampert, "is that you have to teach the dog to track a toy. Most dogs jump in the water and go get the toy -- the game is to go get it. But when you teach the dog to track the toy, you teach him to follow the toy and catch it in the air. Whether he gets it doesn't matter. He has to learn to stretch out to get it. That's how you measure the jump."

Baxter grew to love dock diving. Now, Lampert reports, "he goes crazy when he sees the dock." There are not, however, many docks in St. Louis. When he's at home, he and Lampert work on ground fundamentals, such as speed, but most of Baxter's "practice" time happens at competitions.

He started competing in 2010 and has, so far, participated in fifteen different events all over the country, including an unofficial contest on the Late Show with David Letterman last October, which he won handily. (He also managed to maintain his dignity when Letterman asked if he was "intact.")

Purina events differ from other dock-diving competitions because the length of the dog's jump is measured by where its nose lands, as opposed to the tail. Baxter's longest Purina leap has been 30 feet, 8 inches, which falls short of the Purina world record of 31 feet, 5 inches, held by another Belgian Malinois named Vhoebe.

Baxter is not unaware of what lies ahead on Saturday. "But Baxter's extremely athletic and he thrives," Lampert affirms. "Dogs know what's on the line, and they go farther and farther. It's amazing."

Baxter on the Late Show: